iPhone, iPad and Kindle Fire users aren’t the only device owners who can watch live streams of their favorite ABC programming. Watch ABC, a live streaming application for the American Broadcasting Company, is now available for download from the Google Play Store.

Just like its iOS counterpart, Watch ABC allows users to stream whatever is airing live on their local ABC station for free. That includes nationally syndicated prime-time programming like Agents of Shield, and local newscasts.

When the application debuted earlier this year, many industry insiders hailed ABC’s parent company Disney, for embracing device owners in such a huge way. ABC remains the only broadcasting station to allow such functionality inside the U.S. CBS, NBC, FOX and PBS do allow users to stream their programming, but only after it has already aired on their broadcast channels. 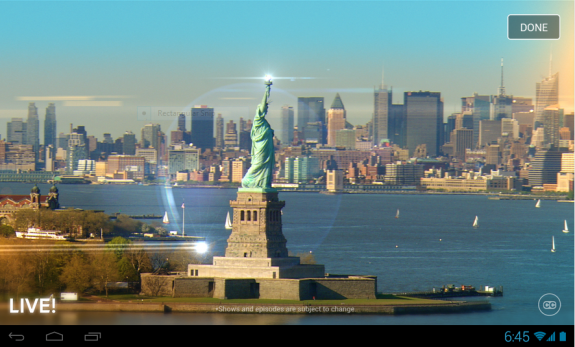 That isn’t to say that Watch ABC users aren’t in for a few gotchas. In order for users to live stream content, they first have to sign in with the username and password credentials for their cable or satellite provider. Watch ABC live streaming functionality is also limited to markets where ABC has made content deals. While the company has deals with AT&T U-Verse, Xfinity, Optimum, Charter, Cox and Verizon Fios, it has only managed to get deals with a limited number of local stations.

Right now, only users in New York City, Raleigh Durham, Philadelphia, San Francisco, Los Angeles, Houston, Chicago and Fresno can use the app’s live streaming capabilities. Again, as long as they have a cable subscription with one of the providers that ABC has deals with.

That means, that users who don’t have cable services are out of luck. These users can still watch the application’s on-demand programming though, so downloading the application isn’t a total waste.

WatchABC only works with a few Android devices now, however ABC has done a decent job of including compatibility with the hottest selling devices over the last few years. Compatible devices include the Samsung Galaxy S III, Galaxy S4, HTC One, Nexus 4, Nexus 7  and Samsung Galaxy Tab 2.