You’d never know it by some of the low-key ways that Ubisoft is promoting it, but Watch Dogs, it’s newly released open world game that allows users to hack the fixtures and citizens of Chicago, is one of gaming’s biggest launches this year. That’s why it’s so unfortunate that users are already reporting that login problems are ruining the Watch Dogs experience.

Reports of the issues first began propping up early, with Watch Dog’s official Twitter account confirming the issues at around noon this afternoon. According to that tweet, the developer is experiencing issues with the authentication services” it uses to log Watch Dogs buyers in Uplay, Ubisoft’s online service that’s very similar to Microsoft’s Xbox Live but made specifically for its games.

According to a later report from Polygon, users affected by the issue find themselves unable to login into Uplay and every time they try they get a message saying “Sorry, Uplay is not currently available.” No other explanation is given,  and users are encouraged to try again later. That users can’t log into a secondary online network like Uplay wouldn’t be all that important if the service wasn’t directly integrated into the game’s multiplayer and companion apps. In past Ubisoft games, like Assassin’s Creed 4: Black Flag, users could simply skip Uplay and head directly into the game’s campaign. 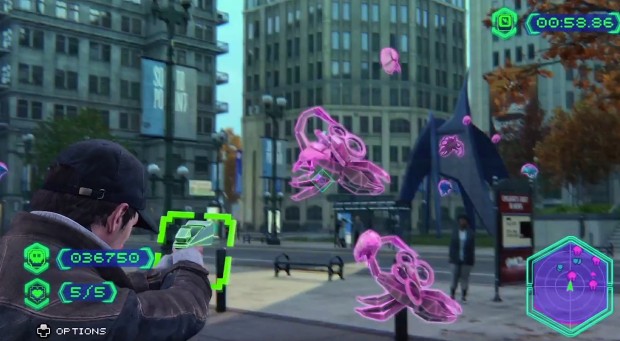 You can use the phone in Watch Dogs to play augmented reality games.

The problem with logging into Uplay seems to be affecting the Xbox One, Xbox 360, PS4, PS3 and Steam versions of the game. Unlike the blackouts and game issues that EA’s Sim City suffered from out of the gate, the issues don’t seem to affect anyone who is trying to play Watch Dogs on their own. Also, some users report being able to login in just fine despite others having nothing but issues.

Though these problems will likely not do Ubisoft’s reputation any favors with release day buyers, these kinds of issues aren’t unexpected. Typically, big console titles always have issues due to the nature of blockbuster game releases. Millions of users likely picked up the game at midnight and there’s no doubt that some of them have stayed home from work or school to play the game. Many more gamers will likely head to stores today to pick up their copy of the game as they hear more about it from reviewers and their friends. For the first day, it’s actually a good problem to have. At least users having issues know that the game is being played by millions of others who’ll be able to play them in multiplayer and more once Ubisoft irons out these issues.

To be clear, there are issues with other parts of the Watch Dog experience. Early today, GottaBeMobile had trouble trying to log into the Watch Dogs companion apps for iPhone and iPad. That’s a big issue as users need those apps to play against their friends and family and try to capture them throughout Chicago. GottaBeMobile attempted to get the game working almost 50 times and was unsuccessful. In one case the game just sat there at the Quick Match setup screen for 20 minutes with no other warnings or timers.

Watch Dogs is available on store shelves today for $60 for Xbox One, Xbox 360, PS3, PS4 and Windows PCs. Users can also purchase the digital version from their console’s respective game stores or from the Steam PC gaming service. Watch Dogs for the Wii U won’t make its way onto store shelves until sometime later this year. Ubisoft hasn’t shared a final release date for that version of the game.