There are dozens of Watch Dogs reviews out there sharing details about one of the most exciting games to arrive so far in 2014, and while I am still working my way through the game I am here to answer the question I am getting from all of my friends, “Is Watch Dogs worth buying?

Unlike many Watch Dogs reviews I did not play the full game, which would be tough to do considering the main story alone should last at least 40 hours and if you perform every side mission it could take well over 100 hours of game play to finish Watch Dogs.

With six to seven hours of Watch Dogs gaming under my belt, I’m here to answer this one question and let you know why I think Watch Dogs is worth buying. At $60 I’ve basically paid $10 an hour so far, but this should drop to less than a dollar an hour of gaming by the time I get around to beating the game.

Is Watch Dogs Worth Buying? (Video)

Watch this five minute Watch Dogs gameplay video to see why I think Watch Dogs is worth buying. You’ll see online multiplayer, hacking, driving and gunplay in a night setting.

The main story of Watch Dogs starts off with a Max Payne style narrative but quickly gets rolling into some action and a big hack to get away from the cops. There are some early missions that feel like they exist only to get you connected with the character, but overall things get fun fast with car chases, shoot outs and hacking.

When you need to take over a ctOS station or perform any of the Fixer side missions you choose to go in guns blazing or to hack the enemy apart first and make it easier to get in and get the job done. If you go in guns blazing on most missions you’ll have a tough time winning, so normally it is a mix of hacks and gunplay is the best way to proceed. This mix of methods is part of what makes Watch Dogs fun. 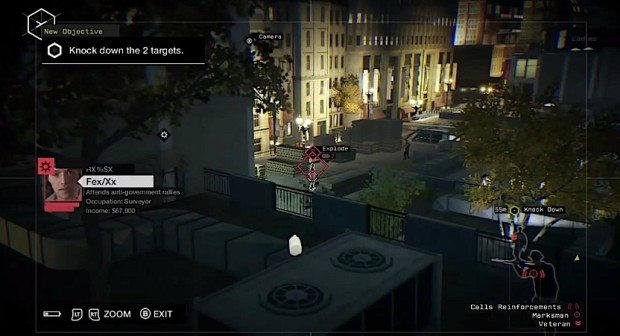 You can hack your way through Watch Dogs, but the best bet is a mix of guns, stealth and hacking.

One of the odd parts about the hacking is how easy it is. Sure hacking a stop light, barrier or bridge while in the car should be simple but hacking almost anything in the game is as easy as holding X or Y for 1 a few seconds. Thankfully hacking some of the ctOS servers is a little more challenging, but that essentially becomes a Tron version of The Pipe Game.

The only two hacking skills you need to learn so far are when to time a hack to take out another vehicle, which is challenging, and how to chain together camera hacks to stay in safety while taking out enemies and surveilling the area. 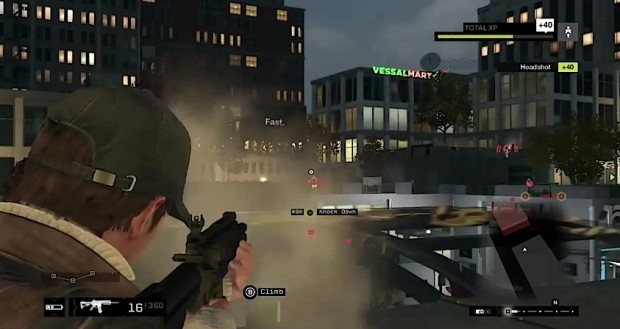 When hacking isn’t enough, pull out a powerful gun.

Watch Dogs is a lot like GTA 5, but it is also very different and that influences how I play and why I feel more compelled to finish side missions in Watch Dogs than in GTA 5. The side missions in GTA 5 are usually wacky and after the first few paparazzi chases tiresome. In Watch Dogs the side missions are about stopping crime to keep your reputation up, which is an important way to stay off the news. Because this influences the game more than just unlocking another mission I am drawn to stopping crime whenever I can. Part of the reason I find these fun and am drawn to them is the desire to keep a good reputation.

In GTA 5 if you steal a car the only way the cops are on you is if they see you do it, but citizens will actually call the police on you if you are shooting or stealing a car, which is more realistic. Thankfully you can soon unlock a skill that lets your smartphone open up any car parked on the road without alerting others. 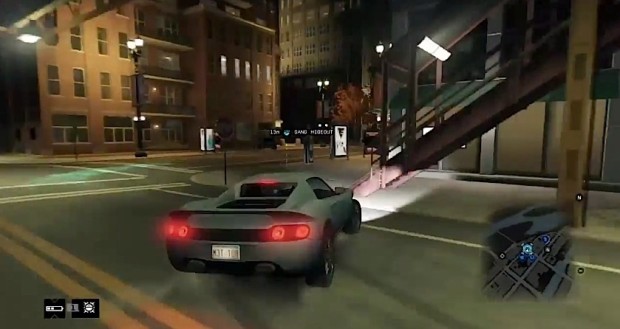 Driving is responsive and fun, plus you can hack lights, gates, doors and more to get away.

While you are playing Watch Dogs others can hack into your game and challenge you. This won’t happen during a story, but often takes place right as I am about to start a mission. The timing may be annoying, but the Online Invasion Watch Dogs multiplayer is fun and decently challenging as the hacker and the hacked. The video earlier in this post shows some of this gameplay.

Read: How to turn off Watch Dogs Online Invasions

As far as Watch Dogs graphics go I’m not here to tell you which version looks best or if it looks significantly better than GTA 5. The open world of Chicago looks very nice and as I fly through it in a fast car it certainly looks good enough for me to lose myself in the game and enjoy playing Watch Dogs. Driving a boat through a stormy night or standing under a streetlight in the rain looks spectacular, so give that a try if the main graphics don’t impress you enough.

For a game to be worth buying it needs to be fun, offer some amount of replay and I need to be able to log hours of game play without getting tired. After six to seven hours I’m only scratching the surface of what you can do in Watch Dogs and can easily see myself playing it for more than the estimated 40 hours it may take to beat the main story.