Using two apps side by side on the iPad is one of the few limitations that prevents me from using the iPad to replace a laptop.

The stock iPad cannot display two apps side by side, which means there’s no way to reference a webpage while writing or follow a twitter feed while watching Hulu plus, but a new proof of concept video shows off one way multiple apps on the iPad could work.

Kyle Howells, an iOS developer, tweaked his CardSwitcher jailbreak app for iDownloadBlog that allows users to use 4 iPad apps at the same time.

Watch this proof of concept in action in the video below. I hope Apple is watching and announces something like this for iOS 6.

The demo shown above is only a proof of concept, but iDownloadBlog reports that it works well on the iPad 2 used for testing. Obviously the higher resolution of the iPad 3 and enhanced processing and graphical power will help something like this run on the new iPad even better.

Concept shows iPad multitasking with multiple apps on screen at once.

I’m excited by the possibilities of this hack, and it’s almost enough to make me long for a new iPad jailbreak, but I would rather have something that allows me to use two apps side by side for work, instead of four apps.

The on-screen keyboard greatly cuts into the usable screen space, so I would plan to use this type of functionality with an iPad keyboard case, so that I could use half the screen for writing in iAWriter and the other half for Safari.

There is one app that makes this a possibility already. PaperHelper splits the screen between a browser and a text editor app, but the format is incredibly annoying. The app is targeted towards students and the top half of the editor screen is overcome with a large header and name section, which no one needs. 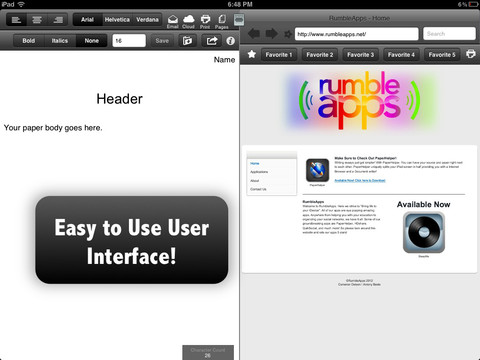 Paperhelper puts a browser and a text editor on screen at the same time on the iPad.

Until Apple offers something like this proof of concept those of us who want to run multiple apps on the iPad screen at once will need to settle for hacks like PaperHelper or hope for a release of this jailbreak hack.

Do you have nay favorite apps that allow for multiple apps to run at the same time on the iPad display, even if it is inside one app?