The ad studio behind some of our favorite iPhone and iPad concepts is back with a new iPhone 5 ad concept that features 6.5 million dollars worth of NFC enabled iPhones and a multi-room, multi-story domino chain that involves a freight elevator and a lot of computer generated graphics.

Aatma Studio created the 10,000 iPhone 5 domino video as a conceptual ad for a new iPhone with NFC technology. The video shows 10,000 iPhone 5 units cascading through an office in domino effect. Aatma says the ad could show the ability to share content over NFC by tapping phones, allowing the iPhone 5 to pass what’s on its screen when it falls until cascading into one giant screen made of iPhone 5s.

The video above shows the iPhone 5 domino ad, which uses $6.5 million worth of iPhone 5 units to create an amazing domino chain, but these aren’t real iPhones. Aatma Studio took one iPhone 5 and made a computer model to create the chain effect.

That’s right, there is only one real iPhone 5 in this video, but that doesn’t make the effect any less visually impressive, though it does explain how the iPhone 5 units in the elevator don’t fall as it moves. 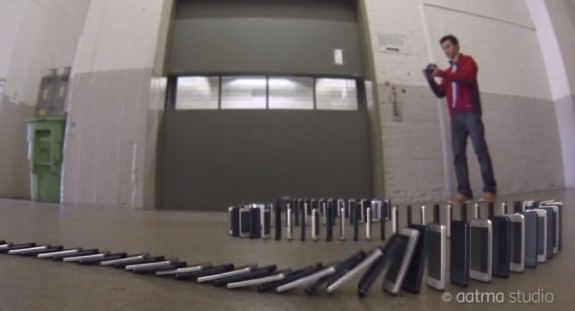 Watch a 10,000 iPhone 5 domino ad, which would cost $6.5 million without computer graphics.

Aatma describes the 10,000 iPhone 5 Domino ad as a concept for a new iPhone with NFC capabilities. Some rumors claim the iPhone 5S will feature NFC technology. With NFC on board the iPhone 5S would be capable of making mobile payments and could share photos and more by tapping phones together, similar to the Samsung Galaxy S3, Galaxy Note 2 and Galaxy S4. Samsung calls the technology S-Beam, but Apple would likely pick a more iBranded name for the feature.

The group also created an iPhone 5 concept video ahead of the iPhone 4S release which highlighted a super thin design and a laser keyboard. Apple recently patented a laser keyboard, but its not likely arriving on the iPhone just yet. Neither are the holographic display or screen size shifting features.

We also get a look at the iPad concept from Aatma which shows off more of the company’s skills with CGI.

We wouldn’t be surprised to see a new iPhone 5S or iPhone 6 concept from Aatma Studio later this year, or even an iPad 5 concept that incorporated the new rumored specs and some special features.