The iPhone screen isn’t easy to scratch, but it is fairly easy to break without protection.

I certainly wouldn’t want to hit my iPhone with a mug, beat it with a hammer or throw a brick on it, but that’s what Buff Labs did after applying their tough screen protector.

Watch an iPhone survive torture and come away unscathed in the video below. 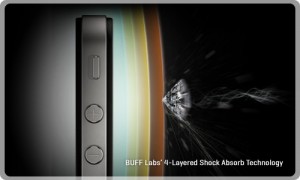 Buff Labs also makes protectors for the iPad, sturdy enough to protect it from this chef’s knife and nut-cracking hammer.

The protective film is not perfect, as seen in this demo video where direct hammer blows eventually break the screen, but it’s still an impressive feat.

The Buff Ultimate Shock Absorption Screen Protector reportedly shows up on eBay and other sites from time to time or $20-$30, but I have yet to find a place selling these tough screen protectors in the U.S.