Microsoft may have not finished battling Apple and Google for control over the smartphone market, but it’s already moving into another key area that’s expected to bolster the Apple’s dominance for years to come. Last week, it showed off a new concept for what it called Windows in the Car, a direct competitor to the CarPlay technology Apple is hoping catches on with users around the globe.

Microsoft showed off the concept during its BUILD development conference in San Francisco last week. Like CarPlay, Windows in the Car relies on the driver’s smartphone to supply it with information.

The early version shown uses the same Mirrorlink technology as what’s included in the Sony Xperia Z handset to beam content directly to a touchscreen built into a car. Since the car’s touchscreen is using a Windows powered smartphone to gather the information, it doesn’t need its own internet connection or built-in storage. Both have been pain points for in-car entertainment systems in the past. 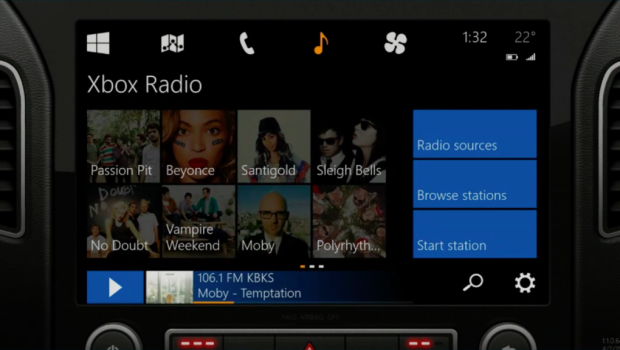 The interface output on the touchscreen borrows heavily from Windows Phone 8 and Windows 8, mixing the two into something that’s both minimalist and completely familiar to anyone who has used any of the company’s modern operating systems.

Unfortunately, Windows in the Car doesn’t have a final release date or feature set. As such, we’re unlikely to see it arrive in the near future. Still, the system showcases just how dedicated Microsoft is to stopping the rise of other mobile platforms.

CarPlay is a serious Apple initiative. Apple announced the product at its World Wide Developer Conference last year. It’s already receiving support from Honda, Mercedes, Nissan, Ferrari, Chevrolet, Kia, Hyundai, Volvo and Jaguar. Users are able to simply get in their car and place calls, get direction and more without taking their hands off the wheel.

Unlike what Microsoft is trying, CarPlay requires that users plug their iPhone in to use many of its more sophisticated features.

Ironically, car entertainment systems were a place where Microsoft once led the way. Its Windows Embedded Automotive operating system is at the heart of Ford’s Sync in-car entertainment system.  Microsoft has mostly let the operating system recede into the background lately, preferring to license its technology to auto makers who then add features and their own name on top of it.

CarPlay compatible systems are expected to arrive throughout the year. A paired down version of the technology is already available as an upgrade in the 2013 and 2014 versions of the Honda Accord.

Related Topics:MicrosoftWindowsWindows in the Car