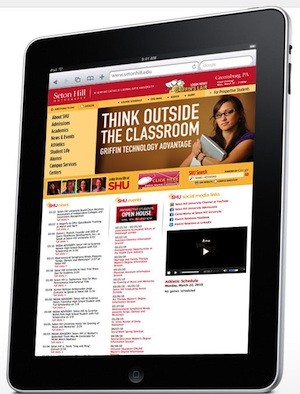 I and many others have said more times than can be counted that Apple is a master at marketing its products, creating hype and turning us all into drooling idiots willing to go into hock. That said, I’m marveling at the mastery they have demonstrated and continue to do so when it comes to rolling out the iPad.

Here we are just a few days away from the devices being delivered and Apple is essentially crowing out most other tech news. The main stream media is jumping along for the ride as well. It’s only Tuesday of iPad delivery week, and Apple has made sure for the last five days or so that it has been at the top of the news cycle in the tech world each and every day. If it isn’t showing off the iPad App Store, it is releasing new videos of the how the device and its UI work with your feet propped up. Today they released the latest version of iTunes (9.1) that you’ll need to make the iPad do its syncing thing. App developers are showing off screen shots of what they will be offering. Today even brought news that Seton Hill U is going to put an iPad in every student’s hands. Everyone from the pro sports leagues to political campaign managers should be paying attention, much less Apple’s competition in the tech sector.

And all of this on a device that no one, including Apple, knows how it is really going to play once consumers start, well, er.. playing with it. I’m guessing the remaining 3 days of this week will also yield more of the same as the hype machine keeps on churning.

Note also, that we’re starting to see some rumors begin to appear this week about the new iPhone. Also keep in mind, Apple is, in the view of many pundits behind in releasing updates for its other lines of hardware. Apple has dominated the tech news coverage since the announcement in January and looks poised to do so right up through the start of the holiday shopping season in 2010. Of course it could get rocky if the iPad starts getting negative reviews on launch, or worse yet starts seeing those “on second thought” posts about 30 to 45 days out.

In any case it is more than fascinating to watch, and I think Apple’s iPad roll out will become a text book case that marketeers will study for the foreseeable future, regardless of the eventual success of the device.