Tonight I tried watching a TV show on my iPad for the first time with my wife. She had just started watching a recorded episode of ‘V’ and I fired up the ABC app and found same episode on the iPad. Holding the iPad in my lap in landscape mode steadily with one hand wasn’t as easy as I’d thought and the shakiness annoyed my wife. I propped it up on a pillow, but after a few minutes she tired of the iPad’s small screen and went back to watching the show on the HDTV. 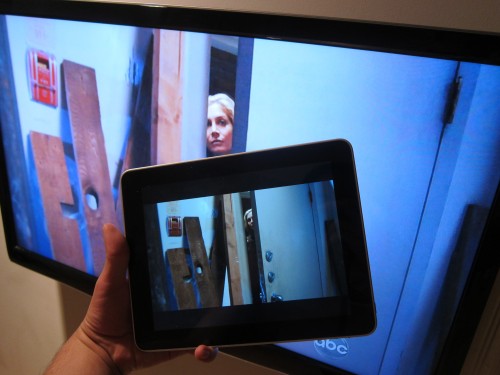 The iPad makes a nice little personal theater, but it doesn’t compare to watching videos on and HDTV or a PC with a larger display. One advantage of  using the iPad to watch video is it’s weight to display size ratio. At just 1.5lb, the iPad is much lighter than my tablet and ultraportable notebooks.

Holding an iPad at a comfortable viewing angle is one thing for a few minutes, but it probably wouldn’t be very fun to do so for a feature-length film.  It’d be great to have a kickstand on the back of the iPad and I’m sure one of the case manufacturers will offer one (if they aren’t already). 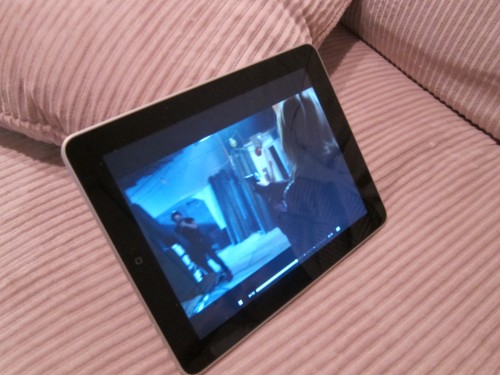 The show looked nice on the iPad, but my wife asked – “why would we watch TV on the iPad when we have a big TV?” We don’t always agree on what should be up on the big screen when we’re putting in time as couch potatoes. She likes crime dramas shows and the Lifetime Movie Channel, while I prefer documentaries and war movies. In a pinch, one of us could watch the iPad and the other watch the HDTV while on the couch.Long story short, we’re probably not going to use the iPad for watching a lot of video in the living room.

We have our HP TouchSmart 600xt for watching movies in the bedroom, so I don’t think I’ll be using the iPad to watch TV or movies late at night.

The iPad seems too delicate to hand over to any of our nephews to watch shows on their own.

So when are we going to use the iPad for watching movies and TV shows? Maybe when we’re on the road with the MiFi or in hotel rooms with crummy channel selection. At home I think we’ll be sticking with the HDTV and PCs.