The more things change, the more they remain the same. Being on a small odyssey I’ve been disconnected from things the last week or so. Turns out there really wasn’t much news of consequence in the mobile world during that period. As a matter of fact, it turns out that some are sort of stuck on a topic that deserves to just fade away. That topic? Microsoft Office on the iPad. We’ve seen Microsoft prognosticator extraordinaire Mary Jo Foley say Microsoft Office for the iPad is alive and coming sooner than we might think. We’ve also heard that Microsoft may be revisiting whether or not it should appear on other Tablets. Apparently Microsoft wants to be thoughtful about this. 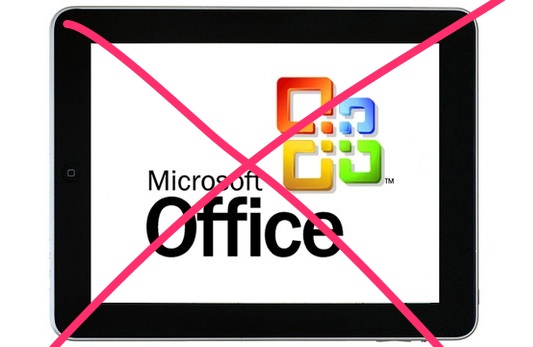 I don’t think much thought is required. In my view the entire topic deserves to die. We just don’t need a Microsoft Office version for the iPad, for Android, or for any Tablet outside of those that run Microsoft’s operating system. It is just not necessary. Don’t get me wrong. I’m sure some still think having Microsoft Office on an iPad will be the bee’s knees. But like that outdated cliché, Microsoft Office on an iPad is yesterday’s news. And if you’re waiting for it to make your iPad experience complete, I hope someday you can find real meaning in your life.

And let’s be real here. Why do you want Microsoft Office on an iPad? So you can work at home on your own time when you could be doing other things in your life? I know, we’re mobile. We need to be able to work anywhere and anytime. Hang that up, or hang up the job that demands that of you. And what about at your office? Why use Microsoft Office on an iPad, (that may well be yours and not your company’s), when you can use the company computers? Do you really think some corporation is going to outfit employees with iPads with Microsoft Office installed the way they do real computers? Not likely.

And let’s talk about the iPad UX and Office for a second. The iPad is a one window device. If you’re working on one document I’m sure it will do just fine. (All those alternatives do.) But if you’re looking at working between several Office products I’m sure that one window approach will drive you a bit batty before you get that document created. Using an iPad for  simple document creation and editing is easy enough. I’ve done it many times using several alternatives. But for heavy duty work it would be akin to the difference between living in a fully furnished home and camping. Sure you can cook, eat, sleep, relieve yourself, etc… in both circumstances. But I think when we go camping we choose to do so to test our capabilities outside of the conveniences that make the necessities of life, well, you know efficient and easier. There may be some primal instinct that drives us to prove that we can rub two sticks together to start a fire, or squat in the bushes to take a dump. But stall surfing just isn’t the same in the wild.

And then there’s this puzzler about Microsoft. Back in the dark ages when Bill Gates was still CEO he couldn’t convince the Office folk to create a touch friendly version. Steve Ballmer couldn’t either. So, somehow folks are thinking the new guy will be able to reverse that trend?  Perhaps. But I don’t see it.

I’d even argue that Microsoft should keep Office all to themselves and only make it available for systems that run Windows. To sell Windows based hardware they need some sort of differentiator beyond pretty Tiles. You know the ones that they are now going to let business users hide if they don’t like them. Hmm? And for all of those who insist that every new product by every company must kill or replace something else, at least we’d have some real competition to talk about.

Microsoft may indeed create an Office product for the iPad, and it probably should follow the Office 365 model. Office 365 seems to be doing well. But then, Microsoft couldn’t come up with a version of that for its own Tablets that were launched over a year ago. And they certainly had enough lead time to do so, had they wanted to.

Does Apple need Microsoft to create Office for the iPad? Yeah, those sales of iPads have done so poorly without it, haven’t they. The iPad is doing just fine without Microsoft Office and will continue to do so. Even if Apple comes out with a rumored iPad Pro, it won’t need Microsoft Office. We’re talking a different breed of Pros here. You’ve seen the commercials. Anybody getting misty-eyed and all emotional over someone creating a table and exporting some data from Excel into Microsoft Word? Didn’t think so.

For those who think that the love affair with Tablets is over and that Tablets are just lying around and not being used, I don’t think those users are saying to themselves “Gee, if only I had Microsoft Office for the iPad I’d use my iPad more.” Not said by anyone. Ever.

Look, if and when Microsoft decides to market a version of Office for the iPad, it will sell lots of copies. I’m sure I’ll buy one of those myself. But like many Apps I will guarantee you that it will sit on many iPads and never be opened with any regularity. Two years ago, even one year ago, that may have been different. But that day has passed and if there was a need for it that need has passed too.

For an industry that thrives and celebrates innovation, I’m amazed at how we’re tied to past ways of doing things. It’s not like there is any romantic or emotional tie to a word processor. Netbooks blew apart the myth that all computers needed to be heavy duty work machines for everybody. Tablets continue that trend. I don’t want to criticize anyone who still needs to be chained to the drudgery of Office type work. But ask those poor souls if they’d give that up if it didn’t mean a paycheck. I’m guessing you’d hear more yeas than nays.

Microsoft’s Office suite of Apps is not just a standard, it is actually very good, if bloated, software. The folks wishing and waiting for it to appear in a version for the iPad are like a dog that chases cars. What is the dog going to do with the car if he actually catches the damn thing?