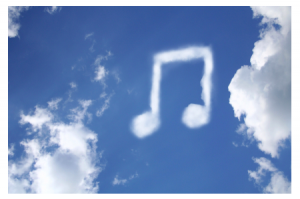 A few weeks ago, reports circulated on the Internet that HP was readying its own cloud-based music service to rival Apple’s, Google’s, and Amazon’s offerings, but a recent report on Billboard says that although discussions are ‘heating up,’ the prospect of a cloud hovering over the webOS TouchPad slate may still be a long ways off.

The reason is that although HP has opened talks with the major labels, the company hasn’t yet detailed any specific plans for the service. Billboard editor Ed Christman writes, “music industry sources caution, as recently as this week, that the discussions remain in the early stages, and that HP has yet to set up parameters for what it wants to do-or even a timeline.” Music labels don’t know how serious HP is about this new venture into the cloud.

Sources say that HP’s service can be broad, perhaps like Sony’s Qriocity service, which can stream a number of different media across a broad spectrum of HP devices ranging from PCs to webOS mobile products.

Though HP may lack the vision or organization on the software side when it comes to music, the company seems dedicated on the hardware side, bringing Beats audio to consumer and enterprise systems, including on the HP TouchPad tablet. Beats audio, developed with music industry veterans, is intended for users to experience music the way the artists envisioned, and as such, HP has the foundation for a music offering on its systems, it just needs the proper software, ecosystem, and perhaps cloud-based offering to do so.

So far, HP’s rivals have implemented vastly differing mechanisms for music in the cloud. Microsoft, with its Zune integration on the Windows Phone 7 platform, allows on-demand streaming through a subscription service. Apple, with its a la carte purchases of tracks and albums, is leveraging iCloud with an optional annual subscription fee to mirror any and all music content on the user’s computer to the cloud–no uploads necessary–and will allow users to access their entire music collection from said iCloud wherever and whenever they have Internet access. Google, which doesn’t have its own music store right now, requires a user to upload content to the cloud with its beta service. Amazon, perhaps as a hybrid of Apple’s and Google’s offering, allows a user to upload their music to the cloud, but content purchased through Amazon’s own MP3 store will automatically get uploaded to the cloud.

If Billboard’s reports are accurate, it seems unlikely that an HP music cloud service would be ready in time for the launch of the TouchPad.