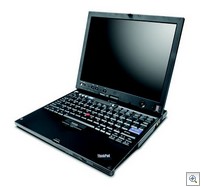 Timing is everything, especially in show biz. I received this evaluation Lenovo ThinkPad X61 Tablet PC the Friday before we started rehearsals on our next show at Wayside Theatre. The show, Forever Plaid, opens our 46th Season and is also the first show in a new theatre space we are building at the same time, so it is quite a hectic time for us here at Wayside Theatre. But, like I said, timing is everything. I had a weekend to check things out and get the X61 set up so that I could really hit the ground running when rehearsals started. I posted my First Impressions of the X61 before the week kicked off and here’s a Week 1 Update of things I’ve discovered. (Keep in mind this is a demo unit I’m evaluating and things might not be the same on actual shipping units.)

Overall I am really enjoying the speed and performance of the X61. Even when I’ve scaled performance back a bit to maximize battery life this Tablet PC is snappier than any other I have used. Hands down. I am also enjoying the brighter screen quite a bit. Lenovo makes a great Tablet PC. 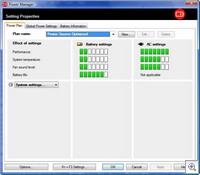 I’ve been able to squeeze almost 6 hours of battery life between work in rehearsals and time before and after. Note that this doesn’t mean the Tablet PC is on straight through a 6 hour period. It is not. I experimented with several different power profiles and for the last few days have been running Lenovo’s Power Optimized profile, which recognizes whether or not I’m on battery or AC. I usually have the WiFi and Bluetooth radios off during rehearsals. I’ll experiment further in the week ahead. But 6 hours is about the longest I’m ever away from AC in any case. (Click on thumbnail for a larger view.)

No complaints, but some interesting observations. As I suspected I went through a period where Vista was doing some behind the scenes adjusting with SuperFetch and the ReadyBoost feature that is enabled with the Intel Turbo Memory feature. I noticed a bit of a performance hit for a couple of days, but things seem to have settled in and everything feels good at the moment. Somehow, some way, the ReadyBoost feature turned itself off at some point yesterday. I have no idea how or why. I know I did not turn it off. I did notice a drop in performance during the period it was off, but I was also experimenting with different power profiles today so I can’t say with any accuracy if that was the cause. This will require further investigation though.

The FingerPrint Reader on the X61 works much better for me than the one on the X60. My print is accepted well over 95% of the time, which is a decided improvement. Because of this, I’m now using this security feature for passwords on websites and enjoying that quite a bit. A niggle here though, it seems to want to register some sites twice and the option to register screen seems to occasionally pop up on some sites with search boxes for some odd reason. Still, Lenovo has obviously improved this technology and I’m enjoying discovering more of its uses.

This was something that I hoped would be smoother from the X60 experience (again a demo unit.) After choosing to undock the X61 by the proscribed procedure, the Tablet PC goes through a few gyrations that to my eye looks quite traumatic. The screen will flash and the processor will spike. (I have no external monitor attached.)  I don’t begin to know what is happening under the hood, but I’ve noticed that it can spike the processor after the unit is undocked and cause the disk to spin quite heavily for a few minutes. This may all be perfectly natural behavior. It just gives me the willies every time it happens.

I’ve already commented on how much I like the brightness of the screen. And I have had a chance to view it outdoors. (Still no successful way to take a picture of this, sorry.) It is readable in outdoor conditions, but the screen brightness needs to be turned up, especially on bright days. That said, the screen collects dust, grease, and oils from anything that comes in contact with it. After using it in Tablet mode for any length of time it can be quite covered with residue. What I’ve noticed that I find troubling is that this residue does cause the stylus to drag a bit as it passes over a dirty area. And if you take the X61 outside the residue shows up as a white chalky looking mess. This seems to defeat the idea behind SuperView in my mind and I find it troubling. I’m not sure what the best method to clean the screen is, and I worry about using any cleaning solution on it until I get some word about what is recommended. Some of the smudges and residue can be removed with a dry cloth designed for cleaning screens (like the ones by 3M) but in some cases it still leaves residue behind. I’ve also discovered that if, on a hot day, any of the residue is still moist or damp, it just gets smeared around if you try to clean it. I have more success if the screen is completely dry. The real plus of the SuperView technology is that the screen is easier to read under fluorescent lighting which is what we have in our rehearsal hall. This is a big plus for me.