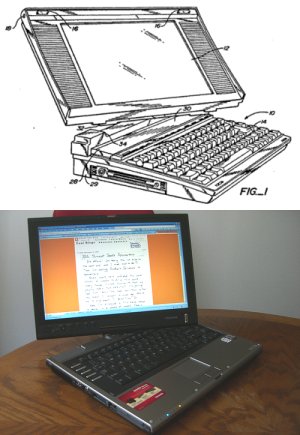 Technologizer dug up some patents for unusual portable computing devices and put them together in a segment entitled “Laptopia! The World’s Weirdest Portable Computers”. Indeed, there is some weird, wild stuff in their list, but I have to say, I’m really not pleased with their pick for #10, “Pivot and swivel mechanism for laptop display” (top image), and their analysis leaves me nonplussed.

Maybe it’s unfair to include this design in a gallery of weird laptopsÃ¢â‚¬”it swivels like a desktop monitor in a way that was both clever and useful. Zeos sold this design as the Freestyle in the early 1990s; I don’t know how successful it was, but I’m guessing it wasn’t a huge hit, since it didn’t last long.

On one hand, they admit its inclusion might be unfair, so I’m kind of cool with that. On the other, they don’t even acknowledge that the design is alive and well in the convertible Tablet PCs, notebooks, and now netbooks that have been in the market for years (and are usually posed in that exact same way to show off the swivel screen, like in the second photo). That particular device didn’t last long, but swivel screens are here to stay.

Couple other designs on the list are reminiscent of devices that are on sale today, and there’s even a wearable computing rig that looks pretty familiar.