If you travel through the Allegheny mountains into West Virginia, you may find your cell phone signal start to fade, and a noticeable lack of free WiFi hotspots.

You’re not about to star in a Deliverance 2, but if you see a sign welcoming you to Green Bank West Virginia, you are in the middle of the Radio Quiet Zone. This may sound horrific, but to individuals who suffer from Electromagnetic Hypersensitivity it’s paradise.

The National Radio Quiet Zone is a 13,000 square mile area where cell towers don’t dot the landscape and WiFi is almost as illegal as moonshine. You see, back in the 1950’s, when the Green Bank Telescope was built, the FCC blocked off a rectangular area which is free of WiFi, Cell towers and other wireless communications that can disrupt or damage the sensitive telescope. 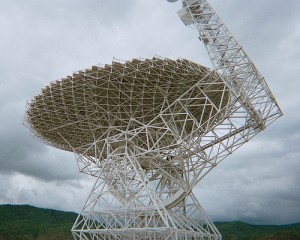 The reason for the Quiet Zone

The BBC recently investigated the area, interviewing a number of EHS sufferers who have moved to Green Bank, not for the beautiful scenery, but for the lack of WiFi and cell phones which they claim produces a wide variety of ailments. Many doctors are skeptical of the disease, but sufferers swear that the these wireless protocols and stations produce harmful radiation.

The local Realtor tells the BBC that he gets a call at least every other week from prospective buyers who want to escape from the radio wave filled cities that surround the Quiet Zone.

For a look at what lengths the keeper of the Quiet Zone goes to keep the airwaves free of  stray signals, check out Wired Magazine’s trip to Green Bank back in 2004. The sensitivity of the telescope is so great that a heating pad with a short is enough to catch the eye of the man in charge of policing the wireless spectrum.

If you plan a trip to the area, you can apparently bring your cell phone and WiFi hungry laptop and iPad, but you may get angry looks if you try to use them in town. No word on what happens if you plug-in a Wireless router, but the punishment would likely come faster than you can download a movie from iTunes.