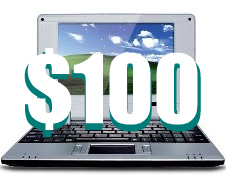 The goal of the original One Laptop Per Child (OLPC) was to create a $100 computer that could be given to impoverished school children.  Around the same time as the OLPC, Asus was working on their own budget-friendly consumer laptop, the Eee PC 701 Netbook.  Two years have passed since the netbook craze began.  Netbooks have become household names, yet prices remain well above $100.

The recent announcement of the CherryPal, a netbook with limited specs (400 MHz, Windows CE) shows how far off the mark we are from reaching the $100 computer price point.  With this being the season of gift giving, I set out to conduct a little research.  Just what can $100 get you when it comes to a fully functional, Internet capable device?

The first item I revisited was the Nokia N800 Internet Tablet.  This device is a few generations old (almost three years old), but offers a fun experience for the buck.  The N800 was a popular device with a crisp screen, built-in stand, and integrated Wi-Fi.  Limitations included the lack of a physical keyboard which later generations included.  The N800 is faster than it’s predecessor, the N770.  The N770 can be purchased used for around $115, but the it’s worth paying a few extra bucks to get the faster, sleeker N800.  The best deal I could find on an N800 was still well over $100, $159 used.
Available for $100: Nope

I was intrigued to see what the original Asus Eee PC 701 was selling for used.  Amazon has a few sellers featuring the galaxy black original for $185.  The specs of the original Asus Eee PC 701 were nothing to balk at.  Limited screen size, a tiny kerboard, and a Celeron processor were obsolete and poorly designed from the moment it was released.  Granted, it did spur on the netbook revolution, but I wouldn’t pay over $100 for one today.
Available for $100: Nope

The Archos 605 Internet Tablet/Personal Media Player (PMP) was first available in the summer of 2007.  The device tends to be much more of an entertainment focused device, but does offer full web access and Flash support via Opera.  A fair sized 30 GB HDD, DVR support, and a handful of other options make it appealing.  The price of this device on Amazon is closer to the magical price point, but still $39 over the mark.
Available for $100: Nope

The real challenge of this task was finding a product that was brand new.  Most of the items available for $100 are sold refurbished or used.  Although I am a proponent of buying refurbished products direct from the manufacturer, there is greater risk of buying refurbished/used items from third party sellers.  The average consumer is better off to pony up a few extra dollars and buy a real netbook, an iPod Touch, or an Android Tablet rather than a glorified word processor.  There are a few good deals out there, but it remains difficult to find a stellar product for $100.  Perhaps that time may one day arrive, but it’s still in the future.

Considering my criteria, are there any products you would recommend for around $100?