Bjorn Stromberg pointed to a great article, by Lalita, highlighting a problem I had never considered: with many UMPCs sporting right-aligned track sticks and left-aligned mouse buttons, what is a UMPC toting lefty to do? As Lalita rightly points out, lefties make up estimated 14% of the earth’s population, and in several popular UMPCs, they are being ignored. Honestly, if I were a lefty and had to use the OQO Model 02, I would get a bit frustrated. The eo V7110 and i7210 exhibits the same problem as the OQO: left based mouse buttons, right based track stick.

Interestingly enough, the Samsung Q1 Ultra actually has the track stick on the left side and the mouse buttons on the right side. 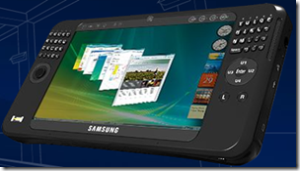 Any lefty GBM readers out there facing this problem with their UMPCs? How have you adapted? What could OEMs do to better design keyboards and mouse controls to work for both left and right-handed folks?