Google WiFi is an expandable system designed to connect to each other in multiple areas of your house for a better WiFi connection. You can pair Google WiFi routers for smaller homes or add many more to outfit your entire house.

In short, Google hopes this is the best WiFi router that you can buy and that it will deliver better WiFi with fewer WiFi problems at home.

The Google WiFi system will automatically switch you to the right WiFi connection and channel for the best system. 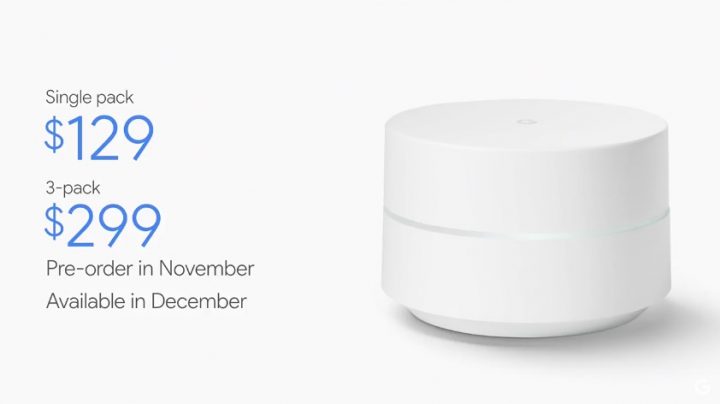 This is Google WiFi.

Although made by Google this new Google WiFi router works with all of your WiFi devices. This includes MacBooks, the Surface Pro 4, the Xbox One, PS4, Windows computers, the Apple TV, Chromebooks, tablets, iPhones, iPads and Android.

This is not the first multiple router system on the market, but it is significantly cheaper than Eero, which retails for $199 for a single unit and $499 for a three pack.

Google Wifi is an expandable system that gives you great internet throughout your whole home. And it looks great, too. #madebygoogle pic.twitter.com/98nu94yDrF

Unlike traditional WiFi systems and WiFi extenders you don’t need to go through frustrating pairing and setup processes, manually switch connections and deal with difficulties of connecting to devices that span your networks.

The Google WiFi release date is in December and Google WiFi pre-orders start in November.