What Is SOPA and Why Are All My Websites On Strike?

You may have noticed that several of your favorite sites aren’t quite working today. Don’t worry, there’s nothing wrong with your browser or your phone. Today Google, Reddit, Wikipedia, and a host of other sites have gone dark or on strike to protest bills currently under debate in the U. S. Senate and House of Representatives. The Stop Online Piracy Act (SOPA) in the House and PROTECT IP Act (PIPA) in the Senate have companies that live and breathe on the Internet seriously concerned.

Many are worried that the stated goal of the bills — making it easier to stop piracy by overseas evildoers — won’t be accomplished and that the actual result will be censorship of the Internet.

Ever since these bills gained traction in congress there have been protests, boycotts, and petition efforts from activists and medium-sized Internet companies like Tumblr. But today’s protest is aimed at reached a far wider audience. 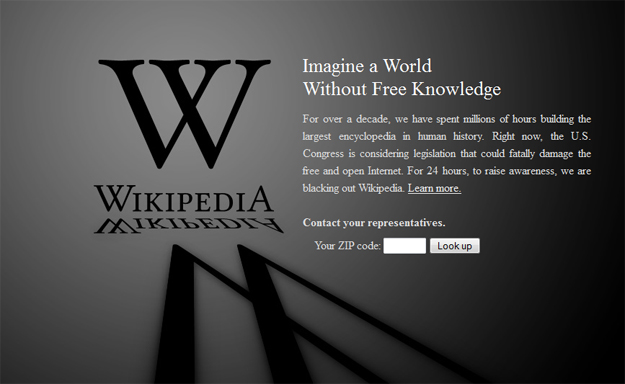 Wikipedia and Google are two of the most visited sites in the world. By bringing this issue to the millions of mainstream Americans who may not have heard about SOPA / PIPA and giving them a taste of how it could directly affect them, they’re sending a strong message to congress and the bill’s supporters [that list is a PDF].

The other sites participating may not be as big, but if you’ve visited 4, 5, or 6 pages today only to find them unavailable, you’ll be shaken from your complacency whether you were aware of this bill before or this is your first time hearing about it.

If you want to learn more about SOPA / PIPA and why so many Internet companies have a problem with the bills as currently written, there’s a long but informative post on the Reddit blog with a great explanation. Or you can click on the links provided by any of the dark / on strike sites you come across.

Personally, I have several problems with the bills and the process by which they ended up in congress. First, I’m more than wary of anything the MPAA and RIAA involve themselves in. Especially the MPAA since it has no transparency yet has established itself as the guardian of morals and culture in our country, at least as far as films are concerned. I don’t like that.

I also don’t like that these organizations are able to buy the votes of our congresspeople to the tune of $190 million dollars. If you’ve followed any of the discussion around piracy and digital media you know that both the MPAA and RIAA have been on the wrong side of that fight since the beginning, coming at the problem in a heavy-handed, un-nuanced way that doesn’t serve the needs of the people who make them money: the audience. Their statement about today’s protest is further proof.

Beyond that, I’m concerned that the people debating and voting on this bill are highly ignorant of how the Internet works. That is unacceptable for a bill of this nature. A law that has such sweeping and wide consequences and could, in the wrong hands, fundamentally alter the Internet should not be voted on by someone who is happy to be ignorant of how all this technical stuff works, har har.

It should be a big red flag that you’ll find few Internet companies on that list of supporters but many, many media companies that are hostile to the advances in media the Internet has made possible in the last couple of decades.

It’s also a red flag that the bills are so badly written and vague. That leaves a lot of room for abuse and confusion should they become law.

Those are my personal reasons for being against SOPA / PIPA. I encourage you to read more about the issue and make up your own mind. If you feel so inclined, sign a petition or contact your congressperson. Here’s a handy list of those opposed to and supporting the bills. I’ll be tweeting links to SOPA-related stuff all day if you want to follow along.