Sometimes the Apple App Store, iTunes Store or the Mac App Store will go down for many users. This happened recently and Apple acknowledged the outage on their System Status site. So what should Apple users do if this happens?

iPhone and iPad users will see the problem when they open the App Store on their iPhone or iPad and try to install new apps, download purchased apps they’ve removed, or try to update installed apps. The problem also affects people who try to get apps or updates on the Mac App Store on their computers. Music, Movies and TV Shows won’t download either since iTunes went down as well. 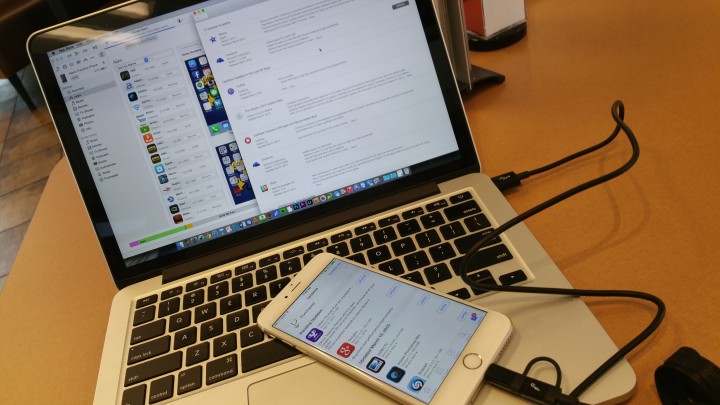 Loading the App Store user-interface takes a long time on the Mac App Store and on the iPhone or iPad. It will eventually load. The stores work fine for some users.

What To Do When App Store Goes Down

Any time the app store or iTunes store seems to go down, first check the Apple System Status site. This site lists the status of all of Apple’s web sites. Notice in the screen shot above that the App Store, the iTunes Store and the Mac App Store show a red triangle signifying that they’re currently down. It reads “Service is unavailable for all users.”

Since Apple didn’t announce scheduled maintenance or show their typical status page that they list when the update their online store, we can only assume this outage wasn’t planned by Apple.

Now just wait patiently. Too many people will keep trying to download their apps or media and that puts a load on the Apple servers, making it harder to get things working. Go do something else and come back and check the status page in an hour or more. When it shows the green box on the store, it’s ready to go and you should try to download apps.

It might help to restart the iPhone, iPad or Mac after this kind of outage.

For people who must install an app on their iPad or iPhone that they already own, connect the device with the computer that they sync with. Open iTunes and see if they already downloaded the app. iTunes backs up apps installed on a user’s iPhone or iPad.

How to Install from iTunes

At the top of the iTunes app find the app icon represented by a compass. It’s in the upper left. Then click on My Apps, My iPhone Apps or My iPad Apps in the top center of that window. Find the app, if it’s listed. The latest version may not show up in the backup section, but at least the user can get the app installed and use it in an emergency.

To install the app manually, click on the iPhone or iPad icon that shows up in the upper left after a user plugs in a device. Find the app listed in the Apps section which the user shows by clicking on Apps in the column on the left. Click on Install and iTunes will install it when the user clicks on the Sync button in the lower right corner.

Use the same process to transfer any music or videos over to an iPhone or iPad. Just click on those sections of the lefthand column. This won’t work on the Mac App Store however.

For users who can’t patiently wait, go to the Apple Support Community to commiserate with fellow Apple customers. For example, here’s the Using iPhone Community.

Notice that the first four conversations center around the outage. Sign in using your Apple ID and take part in the threads. Be respectful and try to help people if you can, since you already know that it’s officially down after checking the status page.