What will it take for a Windows 8 tablet to succeed? Less than you think. Microsoft has one big advantage that everyone has been calling their Achilles heal up to this point: they will be last to market.

As a kid I remember playing games at recess. Who could hit the 3-pointer or jump the furthest? Everyone wanted to go last because they could see how well the other guys did and knew what hey needed to do to win. Microsoft knows what Apple has. They’ve seen the Honeycomb tablets from Samsung, Acer, Asus, and Motorola. They watched as HP’s WebOS tablet jumped into the game and then fell out of the ring.

So they know what the playing field looks like. And by the time they finish their OS, Amazon’s tablet will be out. Being last doesn’t offer an advantage if  you don’t get the product to market in a reasonable time, but this space is still in its infancy.

Up till now everyone says Apple’s huge lead will give them a big advantage over Android, WebOS and Windows. That’s true if you have no track record, as in the case of Android and obviously the case with WebOS. But Microsoft has dealt with tablets for ten years. They just needed Apple to show them how to make one the ordinary person would actually want to use.

Now that they see what that looks like, they can succeed. 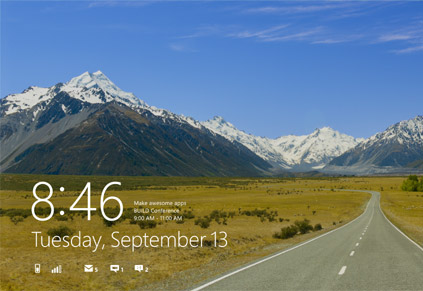 One issue that the average observer forgets is this: There is a pent-up demand for a Microsoft Windows powered tablet that runs popular apps like a full version of Microsoft Office, Photoshop, or (fill in the blank with your favorite windows app). Then you can add to that the desire from the enterprise market for a tablet that will run their specialized applications on both a desktop and a tablet. For example, as a pastor I use a niche type of application called Bible study software.

The Bible software that I run on my computer has more tools than most people would ever imagine using. I love it and it helps me do some advanced study of things like Greek, Hebrew and searching for different subjects in the world’s best-selling book of all time. It also allows me to keep track of my studies by applying a digital version of margin notes and highlighting. I can bookmark passages. All of this becomes searchable through the software. However, when I run the version that works on an iPad or an Android device, I lose most of the functionality I have on my MacBook or Windows computer.

Into the Windows tablet void steps Windows 8. It runs on a tablet but can also be docked, controlled with a mouse or keyboard, and hooked up to my 26″ Samsung monitor. I will have all the tools I use both on the road, at the coffee shop or in my church/home office. One device to rule them all!

Apple makes tons of cash. They sell a lot of Macs, iPads, iPhones and iPods. But they still only account for a small percentage of the install base of computers when compared to Windows. A lot of Windows users love their iPads, but if HP, Samsung, Toshiba, Sony or the other manufacturers who partner with Microsoft can put out a tablet that runs Windows 8 smoothly and at a decent price, they will sell well. What’s more, you will be able to add up all the manufacturer’s numbers together and Windows v. iOS v. Android will find Windows way out ahead within 18 months of Windows 8’s release!

Here’s my list of the bare minimum specs that these OEMs must include for the above to come true. I rate each’s importance from 1-10 with 10 being absolutely essential.

What would you add or take away? Do you think Microsoft and their OEM partners can deliver?

Here’s my out so that I can save face if Microsoft and friends stumble. If the first three things on my list don’t happen, then neither will my prediction. If these tablets are priced more like Windows tablet PCs from the past (over $1,500) then not only will Windows 8 tablets fail, Microsoft might fall apart as a company because they are betting the farm on mobile with the Windows 8 Metro UI.