Some of these apps deserve a spot in the top 25, but according to a developer who posted on TouchArcade, there s a company out there guaranteeing to push free apps into the top 25 list for as little as $5,000.

TouchArcade user walterkaman claims that the company walked him through the Top 25 iPhone Apps in the U.S. App Store, calling out the following apps as clients. 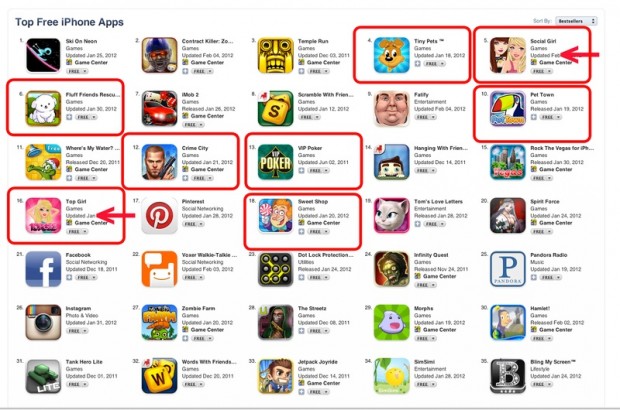 Apps in red are alleged to have manipulated app store rankings

Developers who distribute free apps do so in hopes of making money on in app advertising, which provides higher returns when the app is installed on more devices, something that happens after an app breaks into the top 25 free apps. Given the huge number of apps in the app store, users rely on these lists more than ever to find new apps, which provides even more incentive.

This company allegedly has a bot farm of fake iPhone users who download the app enough times to push it into the top 25 apps. From there, real users notice the app and start using it, sending ad dollars to the developer and pushing the app higher in the rankings. 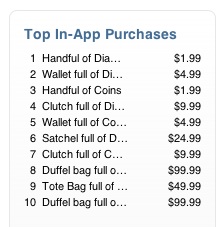 If these allegations are true, a third of the apps on the 25 Top Free iPhone Apps list are there thanks to trickery. While you don’t need to worry about any fraudulent in app activity, you should be concerned about the potential for wasted time and to be tricked into wasting money on in app purchases.

The real problem with service that use bots, fake downloads and fake reviews to download apps is the potential for it to spill over into the Top Paid iPhone Apps list, where users could easily waste money on an app that made its way to the top with trickery. While this would cost the developer more money, the potential reward is high.

Before you download an app that sounds too good to be true, or makes you wonder how on earth it made it into the top 25 free iPhone apps, you should search for reviews outside of iTunes.

Apple is normally on top of any App Store shenanigans, but this time Apple appears to be playing catch up. Apple is rumored to have pulled the apps from developer Dream Cortex for manipulating rankings, though the company claims it doesn’t know why their apps were pulled.

On Monday, Apple  sent a reminder to developers to beware of third-party marketing services that, “advertise or guarantee top placement in App Store charts.”

Apple may be on the verge of a crackdown, issuing the following warning to iPhone developers,

Even if you are not personally engaged in manipulating App Store chart rankings or user reviews, employing services that do so on your behalf may result in the loss of your Apple Developer Program membership.

Apple is particular about which apps can get in the App Store, but the company needs to invest more time and resources into fighting apps that rise to the top 25 through nefarious means.