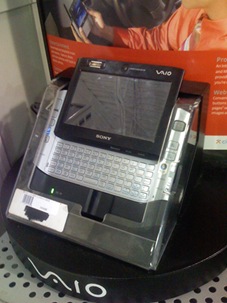 I was in CompUSA the other day and had to do the classic double-take when I noticed a Sony UX UMPC. I was impressed that the popular hand-held UMPC on display, but was again dismayed to find that it was locked way in jail keeping folks from actually holding it.

All of the controls were covered up, and it was practically impossible to try out the keyboard. About the only thing that I could do was move the screen up and down. How can people see the value in the cameras if they can’t take a picture with it?

I can promise CompUSA and Sony one thing: you won’t sell any UMPCs unless people can hold them in their hands – period.