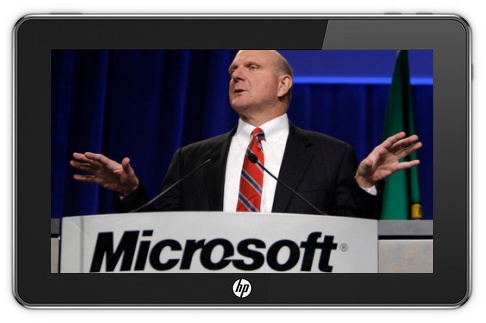 As Warner noted earlier, we’ve gotten more words from Steve Ballmer on tablets running Windows 7, and I agree, they are all just words at this point. The tragic part is, even if you take him at face value, Ballmer didn’t actually promise anything worthwhile.

Remember when netbooks first came out? They were low-powered notebooks with 7″ displays. The ASUS Eee PC offered 2GB SSD powered by an Intel Celeron-M ULV 353. Xandros Linux was chosen as the operating system over Windows XP. Why? Because Xandros was “better” than XP? No, because you can’t fit XP on a 2GB SSD, and even if you did, it would be barely functional and slow as molasses with that Celeron ULV processor. Netbooks started out using Linux because Windows XP wouldn’t fit. So what did Microsoft do about that? Strip down their OS? No, they waited for the hardware to improve.

Intel started offering their Atom line of processors, which were cheap enough for netbooks and fast enough to run Windows. Tiny SSDs were replaced with cheap 80-160GB hard drives. Screen sizes increased to today’s 8-10″ standard. Microsoft offered better pricing for netbooks, but technologically, they didn’t do anything specifically for netbooks. At most, they convinced vendors to upsize the hardware to accommodate Windows, but they didn’t change Windows.

Microsoft got caught flat-footed by netbooks, so I cut them some slack for Vista not being ready for them and offering XP as an alternative. But after some early back and forth, the Windows 7 Starter Edition for netbooks wound up being just the basic Windows 7 operating system without premium features. It offers no netbook-specific functionality. Yes, Windows 7 is a big improvement over Vista in terms of running on the hardware, but that’s an improvement on all hardware, be it new netbook, old desktop or anything in-between.

So basically, the only thing Microsoft really made happen for netbooks is better pricing. They didn’t squeeze out Linux as the main netbook OS. They just waited for hardware improvements to allow Windows to be an option, and let their dominance of the OS market do the rest. That won’t work with tablets. If they just want to make faster and cheaper Tablet PCs, then by all means, go the netbook route. I encourage it. But as much as I love Tablet PCs, I’m not going to pretend that price is the only reason they haven’t been embraced by the consumer market these past nine years.

If Microsoft wants to make things happen for tablets, they have to do it under the hood: improve the interface, make it as easy to control with touch as it is with mouse or pen. Making business deals and waiting for hardware improvements, like they did with netbooks, isn’t enough. Unfortunately, between his talk about working with vendors and waiting for Intel’s Oak Trail processors, that’s all Steve Ballmer has claimed they would do. Whatever else may be happening on the software side, Ballmer offered no reassurances about that.