When does size matter on your Tablet? 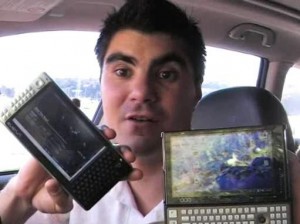 Over the weekend, news leaked of Apple preparing a larger iPod Touch to compete with low end tablets that offer a smaller screen size than the iPad’s 10” display. This comes after Steve Jobs has stated a that a 7” tablet isn’t the same as a true tablet in a 10” model.

Add to that the fact that Samsung has a 10” tablet arriving very soon in the next generation of the Galaxy Tab. It was an inevitable upgrade, but it has me wondering what the “perfect size” for a tablet PC really is. Do companies see the 10” profile being the only answer or are they simply trying to gauge the perfect approach for consumers.

I don’t mean to say that there is a size that everyone should be using. After all, some people prefer a 13” laptop while others like to sit at their desk with a 27” monitor. It’s a matter of preference. But, in terms of what the market wants, it’s a good question. There are more than two dozen tablet computers arriving in 2011 and each of them sports a different selection of key selling points, but many have settled for the 10” display size.

Beyond what Apple has produced and sold, we know very little about what consumers really want or need out of a tablet device. With projections pointing to three times as many tablets selling in 2011 than in 2010, we know that people want them, but what specific selling points will work as the market advances?

While some people are worried that the market will become oversaturated in the next two or three years as so many companies try to jump into the fray, I think it will probably help a lot of them figure out exactly what consumers want. Does screen size matter? Does resolution matter? Can real work be done at 7” or is this in-between size formatted more for entertainment?

At the same time, look at the ruckus started by Motorola’s $799 price point for the Xoom – a 10” tablet. The device is not available yet and some analysts are worried about its viability. Personally, I think the Xoom will sell just fine – though whether it can become the mythical iPad killer I don’t know. Either way, that larger screen size surely has an impact on the device’s price.

For a company to maintain profitability and provide many of the features desired by customers, screen size is a tempting target. Samsung offered a 7” only tablet with their first foray into the market. Dell offered first a 5 inch and now a 7 inch tablet with their Streak tablets, allowing them to keep the price under $500. And when the Playbook launches later this year, it will come in at 7 inches, though how much it will cost remains to be seen.

There is no “perfect” size for a tablet. If the market really does bloom to more than 240 million by 2015 as some have forecast there will be plenty of room out there for both 7 inch and 10 inch tablets. The real question is this – what will a successful 7 inch tablet look like versus a successful 10 inch tablet? And what about multimedia only devices like a potential 5 inch iPod Touch?

Personally, in the past I’ve used an OQO e2 (5” device) as a primary device for a 9-month period, and yet currently my device of choice is a 13.3” Tablet, i.e. the Fujitsu T900. Maybe size matters differently as we age (no pun intended), and I definitely know it matters differently as our workflow and productivity needs differ too. When I was using the OQO I was constantly in-and-out of meetings, cars, and planes and constantly mobile. Currently my meetings take longer, I reside at several destinations and definitely multi-task more heavily. So while the 5” screen with Active digitizer and pull-down keyboard was enough 2yrs ago, now the 13” Tablet with dual mode multi-touch, and digitizer input, and convertible full QWERTY keyboard I find hard to replace as a primary device.

To me the magic numbers lie in my proposed usage. For my primary machine I never go bigger than 15” any more as I just don’t see the need, and I definitely hate the reduced mobility these sized devices create. And yet as my preferred secondary device I find the 10” Tablet is most rewarding as its large enough not to struggle when multitasking, and yet small enough to not warrant dedicated carry bags or man purses! LOL. I just find 5” and 7” devices hard to justify when I may as well revert to my phone (currently Samsung Galaxy S) for simple data manipulation – and of course phone calls.

Does size really matter, or does the ecosystem you plug into play a role also? Is iPad’s success partly due  to the taylored applications and how thye reside on the device, hence more effectivley using screen size?

What are your thoughts?  Tell me your stories!