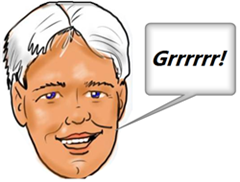 It was to be a great long weekend out of town.  My sister and I had been planning a big event to celebrate my parents 50th wedding anniversary.  We had a great event with lots of great friends and family, and the folks truly enjoyed their time.  I used my Lenovo X61 and a portable DLP projector to project 50 years of memories on a wall at the venue while playing 50’s music with my Zune plugged into some speakers.

Connectivity and companion processes failed me — in multiple ways.  My mobile warrior toolkit has been developed over a few years.  It includes such devices as power inverters, portable wireless routers, all the right charges and cables, etc.  I am used to having a few gotchas here and there, but usually have a backup solution to fall back on.  In some cases this weekend I had a backup, in some cases I did not, but was just frustrated with the myriad issues I had.  Here are a few:

Did you notice my annoyance building?  I had just about every tech device I own and had planned to use fail me this past weekend in one way or another.  So this begs the question — Why do I keep trying to do this stuff?  Why so many problems? Am I being unrealistic in my expectations as a mobile computer user?  As I go about my workday, I have debugged most of the normal things that occur so do not notice that many issues, but when I enter into a new scenario and have this many problems, it seems to me the debugging process is nearly impossible to do beforehand.

If it can go wrong, it did this weekend.  Fortunately, it did not stop anything critical from happening.  What it did do was better help me to understand the non power user’s frustration with the current state of technology.  New devices arrive so fast, that they never really get a chance to get fully debugged, understood or implemented.  It is always about the newest and best device, and moving on to it.  I wont go into the full list, but some of my older equipment would have served me better than the current stuff.  It really stunk that my wife’s legacy TC1100 with Windows XP (a wonderful device btw) worked better this weekend than my brand spanking new X61 with Vista.

So how about you?  Do you get frustrated with nothing ever really working fully?  Do you settle for backups or give up functionality to keep the stress out of your life?  Am I the only one?