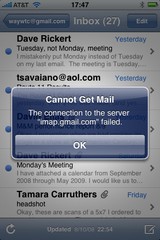 I took what for me is an early afternoon off from the office hoping to catch a bit of a breather, but still connected via phone and email. Well, no it isn’t completely an afternoon off as I was (and am) expecting several emails with work information that I will look at later tonight as I prep for tomorrow. While waiting to get a haircut I thought I’d check on those emails but kept getting a server failed message. I assumed it might be a network issue, but when I took a look at Twitter I realized that GMail seems to be down for quite a few folks in quite a few locations.

While some of this work is important at least it isn’t overly critical, but I’m sure others are in a more tricky position based on the tweets I see flying by at the moment. Fortunatley, I’m able to use a couple of other options to get the info I need after making a few phone calls.

We’ll have to see how long this outage lasts and what the situation really is. Could be interesting.

UPDATE: Irony always wins I guess. After plugging in my iPhone to grab the image to the right, this popped up in iTunes advertising MobileMe. Ouch. 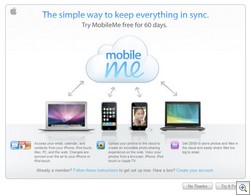 UPDATE 2: As of 6:44pm US Eastern Daylight Time, GMail is back up here.