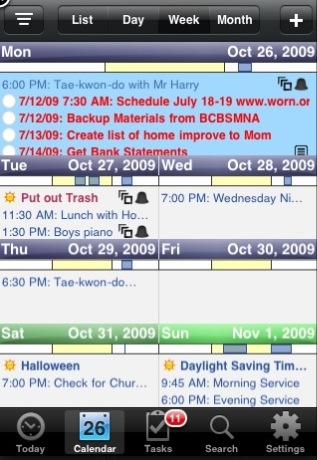 Dan Cohen from GearDiary talked to Alex Kac, the founder of WebIS  about how his company plans on bringing Pocket Informant, one of Dan’s favorite iPhone applications, to the iPad. Kac was quick to point out that the company’s not in a rush to build an iPad-specific application, but will instead refine its Pocket Informant for iPhone so it looks ok on the iPad to get things started. After the dust settles a bit (and they actually get a chance to handle a real live iPad), the company will develop Pocket Informant for iPad.

For the past couple of years. It’s pretty much a one-size-fits-all affair when it comes to building an iPhone app. Sure, you have to worry about variables like  whether or not your users have a video capabilities (3GS) or not (EDGE/3G), but developers haven’t had to worry about what size screen you’d be using. Not all of the 150,000 apps are going to be optimized at launch and I imagine we’ll see a good share of apps not getting along with iPads on April 3.

Obviously, the iPad allows for more robust applications, but I wonder if developers are going to focus their efforts on the 150,000 (so far) iPad pre-owners or the millions of iPhone owners across the globe. Larger developers have the resources to bang out apps for both platforms, but the little guys are probably going to have to focus their efforts on one device or another. In the short term, I think a lot of developers are going to just iPad-ify their iPhone apps and wait and see. In the longer term, I think developers will focus their efforts on where the money is. Where the money is will depend on the type of application, competition and other factors. It’ll also depend on their customers’ willingness to re-buy apps.

I don’t use Pocket Informant and I’m still on the fence about buying an iPad, but if I do end up with an iPad I’m going to be put in an interesting situation when it comes to buying applications. Will I have to re-buy apps when they grow up and get full-blown iPad versions? Will I really want to re-buy them?  This is a minor annoyance for low-cost apps, but what about my $30 SlingPlayer app? Surely, Sling Media will be able to stuff more functionality and features into an iPad app, but I’m not sure if I want to pay another $30 (or more) for something that I can get for free on my tablet and already have on my iPhone.

So where do you think developers are going to focus their efforts? iPad or iPhone?