Many smartphone buyers already know they want an Android device over an iPhone or Windows Phone, but once they decide on that there’s a wide array of different choices on Android and multiple options to consider.

Most advice you’ll see when browsing the web seems to be the same. Suggesting users buy the new Galaxy S5, Moto X, or iPhone 6, and doesn’t consider the many different needs, budgets, or preferences of prospective buyers. With so many Android phones available it can be hard to follow all the news and options. Below we’ll go over some of the best phones by size, price, screen size, and more to help make the decision a bit easier for buyers.

Of course calling any smartphone the “best” is relative to the users wants and needs, but here we’ll try and do exactly that based on multiple different aspects, and help buyers decide what Android phone is right for them.

Smartphones running Android come in all shapes, sizes, quality and different prices, so finding what’s best for you can sometimes be a challenge. There’s premium smartphones, junk options, and then quality devices like the Moto G that are budget friendly, but not garbage. It’s tough to weed through everything, so read on and let us do the work for you.

If you want an Android smartphone with a big screen you have plenty of options. Android paved the way for the large iPhone 6 Plus with 5-inch or bigger phones, and there’s now more options than ever. That said, only a few are worth looking at these days, and those are the Samsung Galaxy Note 4, the Nexus 6, or the LG G3.

The newly released Nexus 6 has to make the list simply because it offers a stunning 5.96-inch (nearly 6 inches) display with dual front facing speakers all inside a device no bigger than the Galaxy Note 4. Meaning it’s one of the biggest screens around, without being too bulky.

The Samsung Galaxy Note 4 however, offers a similar premium top-tier experience with a 5.7-inch display, quad-core processor, impressive 16 megapixel camera, and a stylus for content creation. These are two of the best phones around, period, and also the best choice for those wanting a large display.

The third choice for US buyers would have to be the LG G3. It isn’t quite as big, coming in with a 5.5-inch display, but it offers the thinnest bezels around and is the smaller of the three phones here. Meaning it’s easier to hold without sacrificing much in terms of screen size.

If the size of the display is all you’re interested in, these are likely the best options moving forward.

If you’re not looking for a massive smartphone but also don’t want a smaller display like phones from 2012, some of the main flagship smartphones released this year are your best bet. Those being the Samsung Galaxy S5, the Moto X (2014) or even the HTC One M8. All three of these phones are in the middle of the pack in terms of size, but are top-tier premium smartphones that have all the bells and whistles.

The Samsung Galaxy S5 is probably the best well-rounded device in our list. It offers a middle of the pack 5.1-inch display, a quad-core processor and a quality 16 megapixel camera. It’s water and dust resistant, and comes equipped with a large removable battery and is available from all major carriers in the United States. It’s one of the best smartphones released this year, and should be on everyone’s list.

The Moto X would have to come second. It’s packing nearly stock Android 4.4.4 KitKat, dual front facing speakers, a powerhouse processor and tons of customizations options (like wood, leather, or different colored backs) and comes with a 5.2-inch display. The Moto X delivers a premium Android experience throughout, plenty of customization, and is priced lower than the others mentioned thus far, being only $499 outright.

Then of course we have the HTC One M8. It’s an all aluminum premium smartphone that’s built to last. You’ll get a smaller 5-inch display, dual front facing boomsound speakers that sound excellent, Android 4.4 KitKat with HTC Sense UI over the top, and dual cameras on the back.

The HTC One M8 Duo camera on the rear is only 4 Ultrapixels, which is our only complaint on an otherwise excellent smartphone. You can’t go wrong with any of these three, but I’d probably take the Moto X first.

Budget Android smartphones are a dime a dozen. However, those are mostly terrible smartphones that aren’t worth the few dollars you’ll be saving. If you want a smartphone that is affordable but not junk, look no further than the new Moto G 2014 (2nd Gen) released in September.

The new Moto G has a 5-inch 720p HD display, a quad-core processor, the latest Android 5.0 Lollipop, an 8 megapixel camera, and even has some customizable backplates to change the color. The best part of this phone though, is the price, coming in at $179 outright. No contracts required.

There are a few other good cheap smartphones that aren’t junk, some of which are outlined in the link above, but you’ll just want to go ahead and get the new Moto G if possible. That or the LG L90 as a second choice.

Smartphones with a massive 5.7-inch display certainly aren’t for everyone. I was one of those and couldn’t use anything bigger than a 5-inch Galaxy S4 for a long time. We know millions of smartphone buyers don’t want a big phone, or are coming from a smaller iPhone and don’t want to make such a huge leap.

That means you’ll want something under 5-inches, something that’s easier to hold, comfortable, and will fit in your pants pocket. The Sony Z3 Compact is probably the best smaller smartphone available today. It was released a few months ago, and is as good as it gets. It has a 4.6-inch display and a large 2,800 mAh battery (same size as the bigger Galaxy S5) and manages to match the specs of flagship high end smartphones.

Those being the same quad-core Snapdragon 801 as the Galaxy S5, HTC One M8, or Moto X, 2GB of RAM, a quality camera, and excellent battery life all running Android 4.4 KitKat. If something under 5-inches is what you’re looking for, look no further than the Sony Z3 Compact. 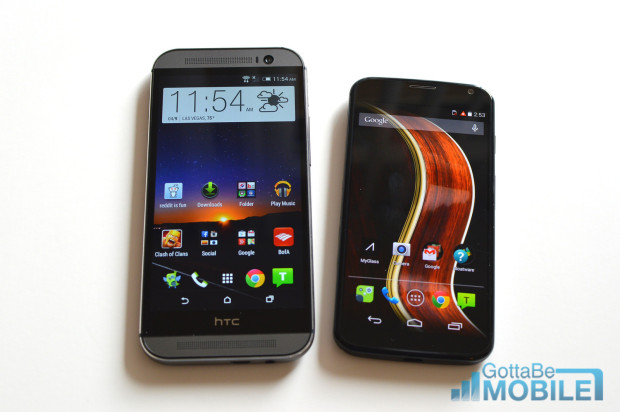 The other options you have are the original Moto X from 2013 with a 4.7-inch 720p HD display, which is still an excellent smartphone that’s absolutely worth it. Not to mention it’s lower in price with a new model available for 2014.

Buyers can also look at something like the DROID Mini on Verizon, as that’s another smaller smartphone that won’t break the bank and still fit in your pants pocket or purse.

If you don’t want to sign a new 2-year contract and be tied to any of the carriers in the United States, you’re likely looking for a well-rounded smartphone that won’t break the bank. Something you can buy off contract and not spend over $500. That’s pretty hard to do, but we have a few suggests.

For starters we’d suggest the Nexus 5 from 2013. It’s still one of the best phones released in the past 18 months, has a stunning 5-inch 1080p HD display and quad-core processor, an 8 megapixel camera with optical image stabilization, and only costs $349 outright. Nothing of its caliber will be under $500.

You can’t go wrong with Google’s Nexus 5, but it’s currently out of stock on the Google Play Store. Places like Amazon and Best buy still have it, but earlier this week Google confirmed they’ll stop producing this phone in early 2015. So snag one now before they’re all gone.

Then of course those not wanting to spend a lot need to revisit what we said earlier about the Moto G 2014. The Motorola Moto G offers nearly everything else premium phones do, only it costs just $179 off contract. Compare this to the $599 or more asking price for most the phones mentioned above, and you’ll see why it’s Motorola’s most popular smartphone of all times.

Most buyers don’t need the biggest display, a 16 megapixel camera, or crazy high screen resolutions. If you just want an excellent smartphone that won’t break the bank, and won’t tie you to a carrier, look no further than the new Moto G (2nd Gen) released in late 2014.

The LG G2 from 2013 is also rather cheap off contract these days, and can often be found for $399 and is certainly worth checking out, as is the Moto X from 2013.

Last but not least is the OnePlus One. This isn’t a household name, but is a phone to consider. You’ll get a 5.5-inch 1080p HD smartphone, a powerful quad-core processor, a 13 megapixel camera with 4k video recording, Android 4.4 KitKat, and all the bells and whistles of most premium smartphones, only it costs just $299. The OnePlus One is China’s version of the Nexus 5, and is an excellent phone for the price. You’ll just have to get it unlocked and use it on a GSM carrier like T-Mobile or AT&T.

It’s hard to recommend a smartphone to someone when you don’t know they’re wants, needs, or preferences, but there’s only so many good options worth mentioning that it’s still manageable. All said and done you’re looking at the Galaxy Note 4, Nexus 6, Moto X 2014, LG G3, or Moto G 2014 as some of our top picks. Those are because the screen size, the options, customization and perfect middle-ground size, and of course price.

There are so many different Android phones and versions from each carrier, and even worse options from small regional or pay as you go carriers. Skip all those phones you’ve never heard of, and get something from our list above. You’ll be glad you did.