It’s not often in the mobile tech sector that US consumers have a choice between the major carriers when it comes to the introduction of a new device. The Samsung Galaxy Tab is one of those opportunities. All four carriers are rolling out plans to support the Galaxy Tab and hoping to woo you.

Engadget has put up a comparison chart for those interested in the Galaxy Tab that shows prices and plans and here it is for you to check out as well.

If you’ve ever wanted to take a look at how the carriers are struggling to figure out price points, this might be it. From the looks of it, AT&T would prefer you to buy an off contract Galaxy Tab from its competitors, but note that T-Mobile and Verizon hit you for an activation fee. Of course it all depends on what you think your data consumption rate will be. You know my thoughts on this. If you’re interested in a Galaxy Tab, wait until the WiFi only versions are released and use a MiFi card that you can use with other devices as well. 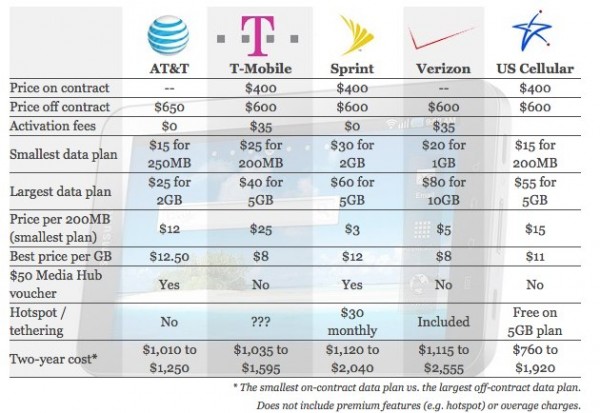