iPad mini pre-orders are slipping to 1-2 weeks for the white WiFi only version of the smaller iPad.

Users looking to order a white iPad mini will need to upgrade to will need to wait 1-2 weeks for delivery or head to an Apple Store on November 2nd. Users can order the white iPad mini WiFi + Cellular, but this model will not ship until mid-November, so it won’t arrive faster.

It appears that Apple underestimated the demand for the white iPad mini, and users may also find it in short supply at retail locations on November 2nd. 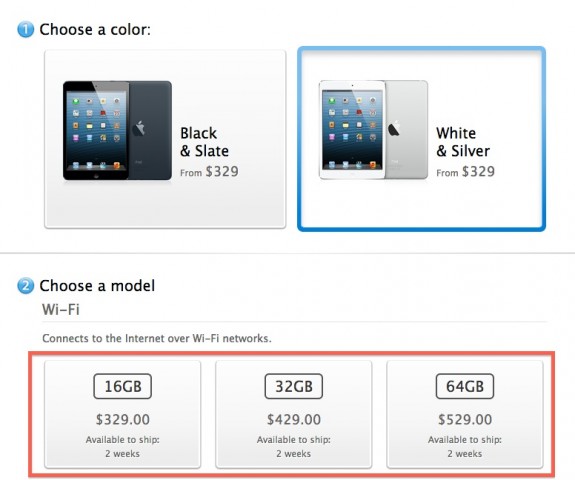 The white iPad mini pre-orders are sold out for release day delivery.

The black iPad mini remains in stock and available to pre-order for delivery on November 2nd for the WiFi only model. Best Buy and Radio Shack may offer the iPad Mini for sale in store on November 2nd, but Apple did not announce any retail launch partners for the iPad mini.

White Apple products tend to sell out faster than the black devices, as was the case with the New iPad launch in March and the iPhone 5 launch in September.

The iPad with Retina Display, the official name for the iPad 4th generation,  is available in black and white with delivery on November 2nd. The WiFi + Cellular model ships in mid-November as well.

The iPad mini is a new iPad with a smaller 7.9-inch display with a 1024 x 768 resolution. Apple chose to put an Apple A5 processor in the iPad mini, which is capable of AirPlay to an Apple TV.  The iPad mini is 7.2mm thick and weighs .68 pounds, or .69 pounds for the LTE model. There is a front facing FaceTime HD camera and a rear facing iSight 5MP camera.