Google CEO Eric Schmidt is already using the upcoming Moto X, giving us some of the best photos of the phone so far .

Italian site Corriera recently posted photos of Google chairman Eric Schmidt using the upcoming Motorola smartphone, showing off some of the phone’s design. The phone doesn’t look much different from recent leaks of the Moto X, though the photos are much clearer than those leaked images. 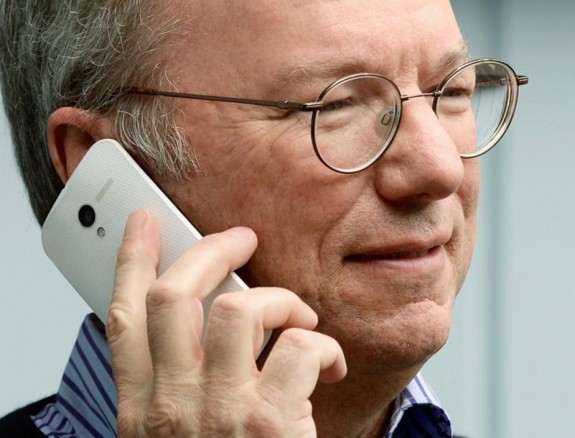 The phone that Eric Schmidt showed off has a white backplate with a dotted texture or pattern applied to it, and what looks like a Motorola logo in the middle. The front of the smartphone is all black, giving it a two-tone look. Unfortunately, none of the photos show what the phone looks like with its display on. The Moto X will presumably run a version of Android that is close to stock, if not actually stock.

Motorola recently talked about the Moto X as a phone that users can design themselves that’s made in the U.S. The company hasn’t shown off the phone yet, however, and hasn’t yet detailed any of its specs. For now all other information about the phone comes from leaks and rumors.

One recent reliable rumor says the customization features of the phone will let users choose their own color backplate and upload a photo for the phone’s wallpaper through a website. It’s not clear how wide the selection of colors is, however. So far the phone has only leaked in black and white.

The rumored specs of the Moto X put it somewhere between mid-range and high-end Android smartphones. It will likely use a 4.7-inch 720p display with a quad-core processor. The phone will likely include a number of tightly integrated sensors that other phones don’t have, but there’s no hint as to what those sensors might be.

The Motorola Moto X will likely arrive on all four U.S. carriers sometime in the near future, with an August release date likely.