The Xbox One has been on store shelves for nearly a year, but the one thing Microsoft hasn’t used to reel buyers in is a special edition console or the option to purchase an Xbox One with a bundled game besides Titanfall. Today, new leaks revealed that the company could soon move to remedy both with a White Xbox One being sold together with a copy of Sunset Overdrive.

A single entry on French retailer Micromania revealed the upcoming Xbox One bundle this week. The page doesn’t include a lot of details about the console itself. It does show a price of 399 euros, roughly equaling $535 in American dollars. It also indicates that users won’t have to wait long to pick up the console bundle. Allegedly, its release date will be October 28th.

That Microsoft would release the white Xbox One as part of a special edition Sunset Overdrive bundle makes sense. Sunset Overdrive is one of the Xbox One’s few exclusive titles coming this holiday season. Bundling the game with a special edition console could boost sales of both – especially since holiday shoppers are going to be eager for reasonably priced way to buy into the Xbox One experience. The page doesn’t provide a detailed description of what’s included in the White Xbox One Sunset Overdrive bundle, so we don’t yet know what will be included hardware-wise. However, from its pricing we can assume that the bundle will include a Kinect 2 sensor. Buying Sunset Overdrive plus an Xbox One with a Kinect 2 sensor today would roughly cost $560 before taxes and fees. 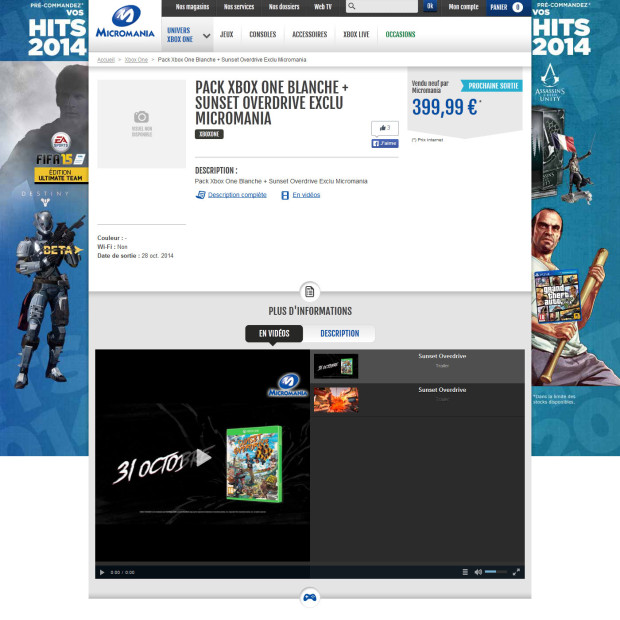 Xbox One buyers have clamored for a version of the console other than the glossy back version that Microsoft released last year. At first glance, many thought their prayers were answered when pictures of a mysterious white Xbox One with black accents and matching controller and Kinect 2 sensor surfaced shortly before launch. Microsoft quickly put an end to those rumors, noting that this wasn’t a new version of the Xbox One, but a ship gift that it’d given to employees who worked on the Xbox team during the Xbox One launch. The front of these White Xbox One consoles included a tagline commemorating the launch of the Xbox One that read, “I made this.”

To be clear, Microsoft hasn’t publically commented on rumors concerning this new white Xbox One Sunset Overdrive bundle. If it is coming, Microsoft could announce the bundle at anytime before Sunset Overdrive launches in October. Two other Xbox One consoles are already available. The $499 Xbox One bundle gets users the Kinect 2 sensor and a single controller. The $399 Xbox One bundle gets users just a controller.