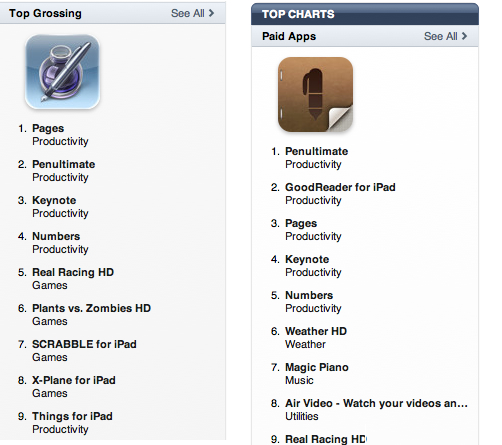 Some say that no one wants Inking on the iPad. Looks like quite a few folks are at least interested in trying it out based on what’s hot and what’s top grossing in the App Store. Penultimate (iTunes link) has only been available since April 16, so that’s four days and already it occupies the number 1 slot in Paid Apps and the number 2 slot in Top Grossing. Given that it costs $2.99 and it is in second place to Pages which costs $9.99 and has been available since Day 1, I think that’s saying something. So, I’m guessing quite a few folks see the merit in being able to quickly jot down a note in Ink on the iPad.

I’ve yet to give Penultimate a real spin but in quick testing the Inking does display much smoother than other iPad apps I’ve tried.