Lot of chatter recently about the next iPhone being bigger, specifically longer. I’m not quite buying it, but I do think a larger iPhone makes sense IF it’s targeting the right audience, and that’s not power users.

Why make a larger iPhone?

I personally have no use for a larger iPhone. I like the current size because it’s easy to handle with one hand. Every corner of the screen and the home button is within comfortable reach of my thumb. 90% of what I do with my iPhone from photos to tweets and everything in-between can be done with one hand literally tied behind my back. The longer screen being bandied about should still work for me, but if it was too much larger, I’d have to be one of those people who hold it in one hand and tap the screen with the other. That said, there are a lot of those people out there.

When I see someone manipulating their smartphone, 9 out of 10 times they’re holding it in one hand and tapping the screen with the other. For them, a larger iPhone with larger display makes plenty of sense. They’d benefit from larger buttons and being able to more easily see those small screen elements. I know folks who chose big Android phones for that reason. It makes sense for Apple to specifically target this audience, keeping in mind, they’re not power users. 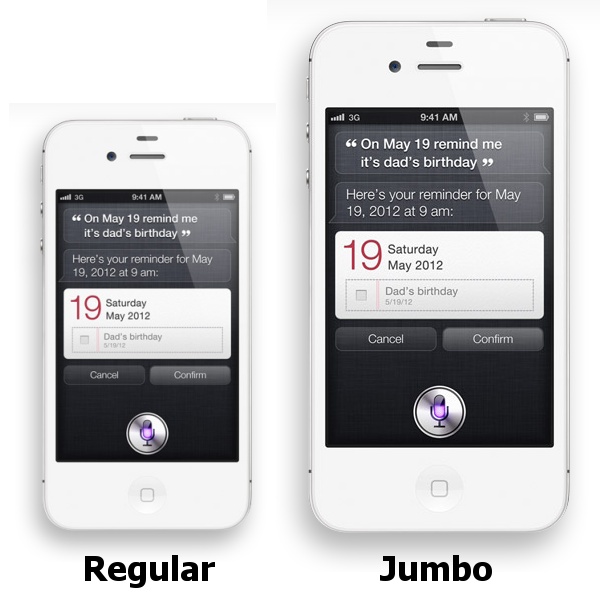 Have Your Cake and Eat it Too

It’s long been believed that Apple would eventually expand the iPhone line beyond one new model per year. That idea got put on hold as they chose to keep older models in production in order to reach lower-cost markets. But now, as the sixth iPhone model approaches, it might finally be time to expand the line with a larger iPhone in addition to the current size.

This has the advantage of reaching that audience I mentioned earlier while still serving users like me who prefer to use handhelds one-handed. But what to do about the fragmentation woes that come with having a new screen size? How do they keep the prices the same? What about battery life? And who would choose the smaller iPhone if the larger model is clearly better? My solution: keep the same screen resolution and use last year’s processor.

The first part of that is a no-brainer. If people want elements on the screen to be larger, then Apple should keep the resolution the same. All the apps should look the same on the iPhone Jumbo as on the iPhone Regular except bigger. It’s what the “hold in one hand, tap with the other” crowd wants, so let them have it. No pressure on developers to make any changes. No fragmentation.

Will it still be a Retina Display? Yes, it can be. With a screen diagonal of 4.37 inches, a display at 960 x 640 resolution will have a ppi of 264, the same as the new Retina Display iPad. Like the iPad, this iPhone Jumbo will be meant to be held in one hand and tapped with the other, which most people will do at about the same distance from their face at either size. This also means Apple can dip into their current sources of LCD panels and not add a new panel density to their supply chain.

A longer iPhone screen could do this too, but the bang per buck ratio isn’t there. It doesn’t add any screen real estate that couldn’t be reached through scrolling and doesn’t really help those who want bigger screens that are easier to read.

To support the larger display, the iPhone Jumbo will likely get a bigger battery and probably a bigger price tag too. To deal with this, I believe Apple should release the Jumbo with an older processor, last year’s A5 instead of the A6 expected with this year’s iPhone Regular. That should bring down cost and keep power consumption on par with the iPhone 4S. This would deter buyers like me who want the latest and greatest, but I’m not the target audience.

Think seriously about the “hold in one hand, tap with the other” crowd who want bigger screens. Sure, there are power users in that group but the majority are casual users who want the screen that’s easiest to read and don’t care about processing power. They’re the folks who are attracted to phones with big buttons, giant remote controls, and keyboards that are easy to read. For that audience, the important factors are screen size, battery life and cost, and it would be worth sacrificing processing power for that.

So, yeah, this approach does leave out the “bigger, better, faster” power user who wants to pack as much information as possible on a bigger screen on the fastest device. But so what? That’s a small sliver compared to the casual user base that just wants stuff to be easier to tap and read. Plus, those power guys are probably already using rooted Android devices with 4-5″ displays anyway. Yes, they’re an important part of the market, but they’re already being served.

If Apple chooses to deliver a larger iPhone to non-power “normal” users, I’m all for it. It broadens the experience with minimal downside. The important thing is that it serve as an expansion of the current line and not a replacement. The iPhone is a superb handheld for one-handed use. That form factor helped make it the top smartphone in the world. Abandoning it would be a terrible mistake.

For alternate takes, check out Why I Want a Taller and Wider iPhone 5 and Why You’ll Love a Taller iPhone 5.