With rumors swirling about the Facebook Phone–also rumored to be called Facebook Home, HTC First, HTC Myst, or HTC Opera depending on the leaks you read and when those leaks debuted–the question remains can the social networking giant appeal to business users as it has for consumers with its first real foray into the smartphone space to compete against the likes of Samsung, Google’s Nexus lineup, and Apple’s iPhone?

The short answer is that Facebook may have a winning solution that could appeal to business users if the phone debuts with its enhanced dialer and caller ID solution that was uncovered in a patent application.

Through the application, Facebook shows how it could enhance the caller ID information from an incoming call with additional information gathered from the social network. When a contact calls you, you’ll be presented with the contact’s name and matching number, the contact’s profile image from Facebook, their most recent check-ins and photos, and other pertinent news feed facts. 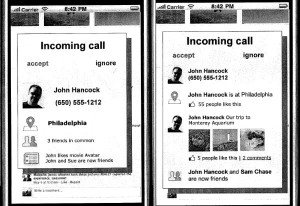 In fact, it’s not unlike what Motorola had debuted years ago with MOTO BLUR or what HTC had done in the past with HTC Sense to combine Facebook, Twitter, and/or LinkedIn update information in the caller ID. However, with a phone that’s built for and around the Facebook experience, the HTC-made and Facebook-branded experience could provide more functionality in a more elegant and useful manner to users.

Where this would benefit would be with sales people who may need to not just know who’s calling them, but may also need to make small talk with a contact that they may not have communicated with in months. Asking your caller how their wife is feeling or congratulating their kids on the most recent soccer victory may go a long way in building that relationship, and Facebook could provide the CRM layer to do so as more people continue to share more information about their personal lives on the Internet space.

And given that a person may have a New York phone number and be presently sitting near the Golden Gate Bridge in San Francisco when they’re calling you, if they’ve checked in to California, you’ll know to also ask about the weather in the Golden State without your caller even having to tell you that they’re not home and are traveling on business.

With 4G LTE, more people are on devices that can handle simultaneous voice and data connections, this shouldn’t be a problem at all as the call can be answered and Facebook information could be pulled up at the same time.

In a sense, this shows that Facebook has matured from a network that’s largely been associated with college and high school students to one that can be used for customer relationship management.

Various mobile companies have tried to tackle the business market through different angles. BlackBerry is doing this through security and its BlackBerry Balance firewall that keeps personal and business data separate. Apple is focusing on security, deployment, and ease of use in a bring-your-own-device IT market. And Samsung is playing up security with its Samsung SAFE architecture and is beginning to tackle BlackBerry’s traditional space with its newly launched KNOX service that attempts to create a work-play divide on your phone. Facebook’s enterprise focus would be the most different from what we’re typically used to seeing on the market today.