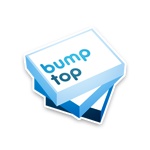 In news I don’t quite understand, BumpTop has been bought by Google. Not a copy of the desktop-metaphor interface software, the whole company. And if you want a copy of that software for Windows or Mac, you’d better get it  now.

TechCrunch posted the first whiff of the news, and it’s now confirmed on the BumpTop website.

Today, we have a big announcement to make: we’re excited to announce that we’ve been acquired by Google! This means that BumpTop (for both Windows and Mac) will no longer be available for sale. Additionally, no updates to the products are planned.

The free version will remain available for the next week. Pro users will continue to receive support, but no upgrades.

No reasons have been given for the buyout. Presumably Google intends to use BumpTop as the user interface for their rumored tablet version of Android or a Chrome OS tablet. That they’re cutting Windows and Mac support would seem to back that. However, I’ve found BumpTop drives processors hard and feels a bit cramped on a tablet screen. I think something like Microsoft Surface is a better fit for it. But then again, I like both my real and digital desktops free of clutter.

To see what the fuss is about, check out the multi-touch video demo and what might be our last InkShow featuring BumpTop, at least for a while.