Frequent users of Google’s search engine may have noticed a few changes over the last couple of days. No, you’re not imagining them. Google’s introduced some slight tweaks to the way it renders users search results, and though none of them are huge, they do make for a cleaner, more airy experience.

The first of these changes is so subtle that is almost hard to recognize. Google has removed the underlines from all of the links on its search pages. It’s not really a functional change, but it is one that makes Google Search more consistent with other websites who have also dropped underlines from their links. Underlined links were originally used as a way to inform users that they could click on those words to be taken to another page.

A post by Google’s John Wiley also indicates that Google has cleaned up the lines on Google Search and introduced slightly bigger fonts that users are able to read better. It’s also introduced a new label that makes it clear when Google Search users are looking at an advertisement. Users may notice that the large black bar is now gone from Google Search too. Google moved those links into a small menu button on the top right.

So why the changes? Google, like the websites of other large technology companies, is in the middle of a transition it hopes will put smartphone and tablet users on the same tier as desktop and laptop users visually. It’s easy to see why the company would do this, smartphone and tablet traffic are growing more than the traffic produced by traditional desktops and laptops. As Google’s Android operating system is a big part of that, the company needs to keep mobile users in mind. 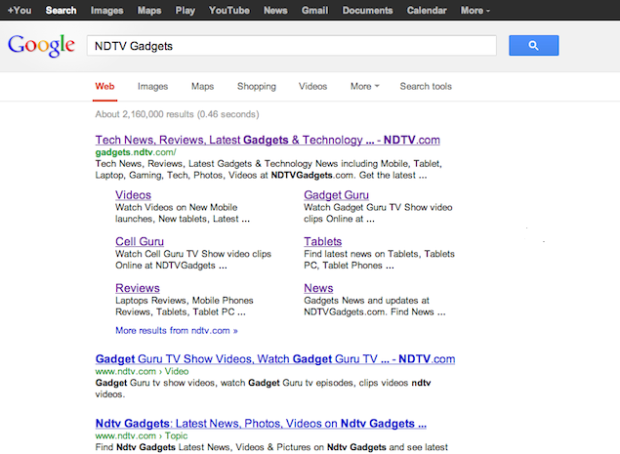 It’s Google’s assertion that introducing these changes and refreshing Google on the Desktop and Laptop to match the Google Search users see on their smartphone allows it to roll out features consistently and improve upon all of its offerings steadily.

Another change could be why Google search results look different for some users. This week Google confirmed that it’d decided to kill off the Banner Ads test that it was running at the top of search results, according to MarketingLand. Originally, they were conceived as a way to let Google Search advertisers standout from the rest of the results on a Google Search page. The test involved over 30 companies who had giant banners placed on relevant Google content.

Unfortunately, users who don’t like the changes are out of luck. There’s no way to roll back any of the visual changes Google introduced into Google Search.