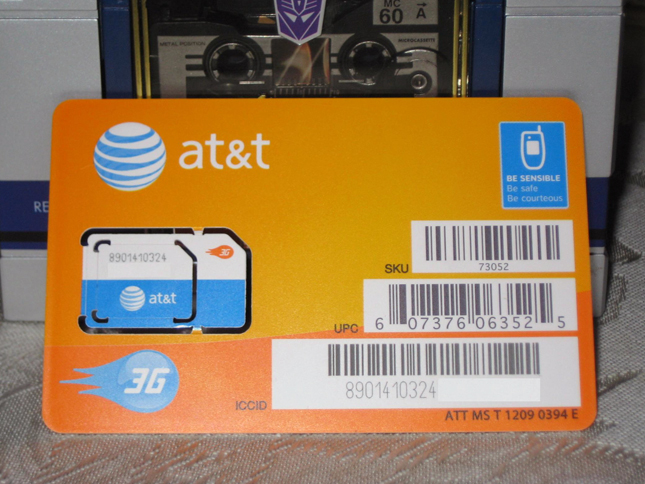 AT&T has been stamping out new SIM cards supporting all the current form factors, including micro-SIM. BGR has the best photo I’ve seen, courtesy of the crassamatic soundwave9. I am baffled, however, at the number of bloggers and commenters who don’t seem to know what they’re looking at.

First and foremost, that whole orange card is the SIM card. Yes, I know it’s shocking to think that could be considered mobile, but you need to remember the standard was established back when mobile phones were giant bricks. That blue and white punch out in the shape of what we currently think of as a SIM card is actually mini-SIM. The smaller cut-out within it is micro-SIM. The actual chip used in all three formats is the same size. There are some technical differences between SIM, mini-SIM, and micro-SIM, but size-wise, it’s primarily a matter of the surrounding plastic.

Thus, no one should be shocked to learn that micro-SIM is just a smaller SIM – mini-SIM is also just a smaller SIM. No one should think the move to micro-SIM somehow defies two decades of established standards – mini-SIM “defied” the original SIM standard so successfully that people think it’s the original standard. (Also, micro-SIM was established as a standard in 2003.) Finally, that’s not a SIM adapter – that is what a SIM card looks like. It’s fine if Joe Average doesn’t know all that, but major tech blogs should demonstrate greater knowledge.