After the Facebook IPO, or initial public offering, Facebook is valued at over 104 billion dollars, but the Facebook apps for the iPhone, iPad and Android are as awful as ever.

Over half of Facebook’s monthly active users use Facebook mobile apps and the mobile web.

That’s 500 million mobile monthly active users as of April 20th. No matter how you look at it, mobile is a big part of the Facebook experience. According to some reports, 12% of Facebook users only use the mobile apps and mobile website. On average, Facebook mobile visitors spend 441 minutes per month on Facebook mobile, which is more than the 391 minutes spent on the traditional website.

Despite this large, and growing set of mobile users, Facebook mobile apps crash, load slow and come with more bugs than a roach motel.

Why are the apps so bad when Facebook is so loaded?

Simple, Facebook makes money on advertising and they haven’t figured out how to make money on mobile yet. It wasn’t until March that Facebook started to make money on mobile, and even then, it’s not a lot. I’m pretty sure the “How Much Am I Worth to Facebook?” tool would cut my $71 value in half if it knew 90% of my interaction is on the iPhone and iPad.

Even as the Facebook ($FB) stock creeps up over $41 a share, there’s no announcement of a new Facebook app, even though the quiet period is over. 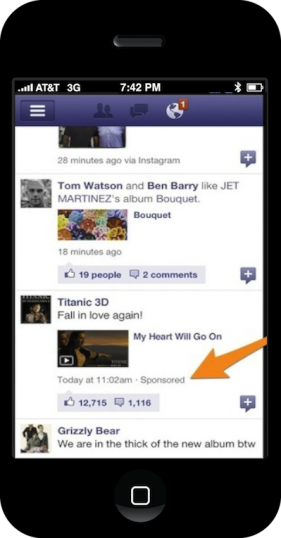 For starters, the screens are smaller and there is no place to put all the ads you normally see on the right hand side of the Facebook app. This isn’t likely to change. Even Facebook can’t stick ads on the right side of the huge Galaxy Note display and get away with it.

If Facebook can’t make money from the apps, they have little incentive to make the apps awesome. Instead, we are left with apps that are good enough. This leaves room for third-party Facebook apps like Friendcaster and MyPad.

Facebook hasn’t given up on apps. The company is looking at ways to monetize the mobile apps, starting with sponsored posts like you can see to the right.

The company needs to make sure that the number of ads don’t turn off users, a tricky number to discern. It’s possible that we’ll see new types of Facebook mobile ads in the future.

Perhaps users will see ads on the white background when Facebook is re-loading. This would keep ads out-of-the-way when I’m using Facebook, but guarantee a lot of ad views since Facebook needs manually refreshed often.

If that doesn’t generate enough revenue, they could always put ads in the Notification drop down. The number of notifications is rarely right anyway, and it also needs manually refreshed.

What do you hate most about the Facebook apps and mobile experience?