Why Hasn't RIM Demonstrated the PlayBook?

GBM Shortcut: A Day in the Sun with the HP Elitebook 2760p 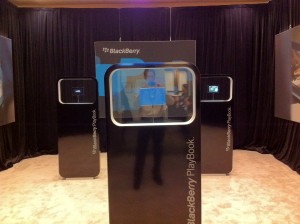 RIM’s generated a ton of buzz around the BlackBerry PlayBook, its 7-inch tablet device that debuted at DEVCON 2010 on Monday. A conference with thousands of BlackBerry developers and enthusiasts sure sounds like the perfect place to demonstrate the first BlackBerry device to break out of the smartphone form factor, but RIM took a different approach.

When the PlayBook was unveiled on stage, us in attendance were treated to a promo video projected onto a big movie screen. RIM’s president had one on stage, but he didn’t demonstrate it. Instead, he just held it as a PowerPoint presentation ran in the background as spoke about its features. When Adobe’s CEO took the stage, the two of them talked about Adobe Flash and Air running on the PlayBook, but again there were no demos.

As Justice Conder points out:

There is not a single frame in the BlackBerry PlayBook commercial that shows the actual device! The only thing being seen in the commercial is CG special effects. Don’t believe me? Watch the ad again. Sure, those special effects are amazingly fast and responsive and cool but where is the device?

RIM execs said that we’d get a chance to see the PlayBook for ourselves after the keynote and during the conference. I was looking forward to so-called ‘Super Apps’ running on the PlayBook and maybe get a chance to play with one myself. At the very least, I expected RIM reps giving live demos in the PlayBook demo room. Instead, all we got to see was three BlackBerry PlayBooks sandwiched between glass. There was a video demo running on a continuous loop.

In his blog post, Justice Condor argues that the PlayBook doesn’t actually exist. I think he’s absolutely wrong as RIM is a publicly traded company and the introduction of such a device is certainly a market-moving piece of news. In fact, the PlayBook announcement took place just after the U.S. stock markets closed. The PlayBook is real, it’s coming soon, but the hardware and software combo isn’t ready for prime time.

Allowing developers and geek bloggers to go hands on with a device that’s not ready to hit store shelves could’ve backfired big time.

I like the idea of the PlayBook and look forward to reviewing one when it comes out, but I sure wish we could’ve seen more at the three day conference. What a tease….

So what’s your guess? Why hasn’t RIM actually demonstrated its next big thing?