The new do not disturb feature makes it simple to turn off all notifications on the notebook so I can focus on work instead of seeing software updates and status updates.

Apple brought the notification center from iOS over to OS X Mountain Lion, and I’m hopeful that this do not disturb feature jumps from Mountain Lion to the iPhone 5 as a core part of iOS 6.

Apple could announce the do not disturb feature for the iPhone 5 in June when we expect to get our first look at iOS 6, the new version of the iOS software that runs on the iPhone, iPad and iPod Touch.

The moon icon in the upper right shows when I have turned on do not disturb, and could easily show up in the iPhone’s top bar, just like the alarm n signal does.

To turn on the new Do not disturb feature for Notification Center, users just need to slide a toggle to the On position at the top of the Notification Center window in OS X. The style of the toggle looks like Apple pulled it right from iOS, so I’m hopeful that it is a sign of things to come for iOS 6.

Why I Want Do Not Disturb for the iPhone 5

There are a number of places where a do not disturb setting would be a huge help. While there is still a need to turn off the ringer and alarms, a Notification Center Do Not Disturb mode on the iPhone would take care of the annoying vibration alerts that would otherwise require changing multiple settings. 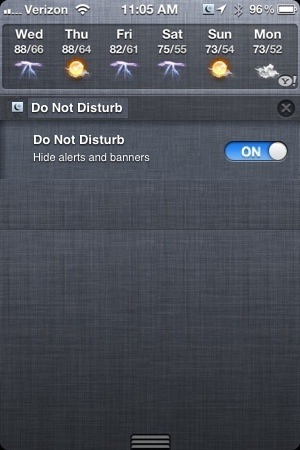 Do Not Disturb for the iPhone 5

Concerts and Conferences – Instead of going viral for interrupting a symphony thanks to a push notification for new levels in an iPhone game, a do not disturb mode would keep things quiet and vibration free.

Sleep – Anyone with Facebook friends on different shifts knows the annoyance of a 3 am vibration alert that someone just posted something witty on their wall. Hundreds of other apps light up the iPhone’s lock screen filling a dark bedroom with blinding light. Do not disturb could keep the screen dark and the vibration motor asleep until morning.

Conversation – Some users will put their iPhone in Airplane mode while having a conversation with a good friend or business partner to avoid interruptions, but a do not disturb toggle would be just as useful, while still allowing access to the web if either party needed to share something or look up a topic related to discussion.

It would be great to offer profiles based on time and location, turning on do not disturb for all apps and text messages at 11 PM any night I am home, but leaving everything alone if I am out or if I am traveling.

Would you like to see a do not disturb feature for iOS 6 and the iPhone 5? Any other places you would use it?