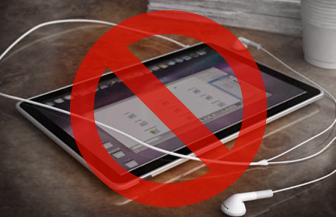 You may have read how I believe the upcoming Apple Tablet or CrunchPad would be an excellent tool for K-12 students. While I do believe these tablet devices could have a significant positive impact on the realm of education, I don’t plan on purchasing one for my personal use. Here’s why:

What can it do that I don’t already have?

Even the homebrew, once-a-week blogs are abuzz with rumors and news about the fabled Apple Tablet.  It sounds real cool; many columnists are commenting that the Apple Tablet will have amazing features which make it the centerpiece of your Internet and multimedia experience, but what does it do that’s new? What will it do that a netbook and my iPod cannot?  As it stands now, I cannot see the benefit in yet another device that does much of the same thing as what I already own.

What about the software?

I predict that the software experience of the upcoming tablet will be similar to what we see with most new products: limited.  Although it will likely be based on OS X, the Apple Tablet operating system is rumored to be more like a large iPod than a full-fledged computer.  Over time this will become less of an issue as numerous useful apps will be created and released.  Whether the Apple Tablet becomes a household item depends upon the user experience delivered the the OS.

It has been rumored that Steve Jobs pulled the plug several times on the tablet project because it just wasn’t right.  If the Apple perfectionist has been as involved as the rumors state, it is possible that the iPad will offer an OS of greater polish than other devices that are new to the market.  The success of the iPhone wasn’t in its call quality or data reliability; the success of the iPhone was in its user experience provided by the operating system which improved over time.

What about the higher than netbook price?

I love Apple products.  My MacBook Pro is the centerpiece of my own Internet and multimedia experience, but the biggest reason why I’ll pass on the Apple Tablet other than the fact that it brings nothing new to my computing experience is its rumored $500+ price tag.  Why shell out $500 bucks for a tablet when a $299 or less netbook will do the exact same for much cheaper?  Over time the price of this yet to be released device will hopefully drop, the software will improve, the bugs will be worked out, and then I’ll consider buying one for personal use.

So are you jumping on the iPad bandwagon?