As I mentioned in a post some time ago, I’ve had a Microsoft Surface RT Tablet on my fall shopping list for some time now. Today, as Microsoft finally announced the pricing and made limited pre-orders available, I pulled the trigger and ordered one. I ordered a 32GB model with the Touch Keyboard and I ordered the Type Keyboard as well. Microsoft has been cagey, perhaps too cagey, with the release of info about the Surface RT tablets. To be honest, that fact almost kept me from pulling the trigger. Microsoft’s strategy with its Surface Tablets has left many with more questions than answers and Microsoft has set itself up for problems if they can’t deliver. But, pull the trigger I did. Here’s why. 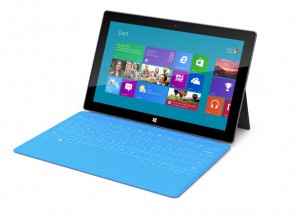 Microsoft is indeed playing catchup with its Surface Tablets when it comes to the Great Tablet Race. Keep in mind that the Pro version of these Tablets won’t be available until after the first of the year. But in this game of catchup, Microsoft is essentially attempting to reinvent itself by taking some big gambles. Unlike Apple or Google or Amazon, Microsoft isn’t gambling by adding something new to an existing business. Microsoft is reinventing its entire business. Setting aside peripherals and the XBox, Microsoft is now in the hardware biz and in a way that may alter more than just the landscape in Redmond. That’s perhaps the biggest reason I’m going to give Surface RT a try. It’s not often we see a major player, (albeit a diminished major player) make such a big gamble. No, I’m not just wanting to help Microsoft’s gamble pay off. I want to be able to draw my own conclusions as to whether or not Microsoft succeeds or fails, or fails somewhere in between.

Quite a few folks have already written Surface and Windows 8 off as a bad bet. There’s quite a number of bloggers and tech journalists who seem to have already drawn their conclusions. I find that interesting since we still don’t know much about these devices. I can understand some of the sentiments on Windows 8. Folks have been able to play around with that new OS for some time now. I’m not sure I understand the complaints with the Surface Tablets though. Yes, Windows 8 is a different UI without a Start Button. Yes, Windows 8 is going to alienate some users, and yes, Microsoft hedged its bets by offering a keyboard (at an additional price) with its new Tablet.

On the first and second yes’s above, I agree with some that Windows 8 might be be a UI change too far for many. But, I think that Microsoft, having taken far too many hits in the recent years while it was deciding on its next move, is probably looking beyond what we all accept and expect today out of a mobile or non mobile experience. Call that long term thinking. I can’t say this as anything other than an opinion, but I think Microsoft is counting on the next generation of computer users and not this one. However, long term bets are increasingly risky in today’s “what have you done for me lately” mobile sector.

On the third yes, Microsoft may be reinventing itself, but it is still tied to some old business models. Most of those models require some sort of keyboard entry. (Think Office). Microsoft also had the advantage of time. Admittedly the long delay wasn’t something anyone wanted. But, as Microsoft watched the number of iPad users who bought some sort of keyboard it was probably breathing a sign of relief. At least the Office folks were. (Keep in mind, Apple offered up its Wireless Keyboard at the launch of the first iPad, although not with as big a splash as Microsoft.) At this moment, no one except a few select journalists have actually really used those keyboards. Microsoft briefed them yesterday, and I would imagine that they are embargoed from talking about them or writing reviews until sometime next week. That’s when we’ll hear the first real words about how well, or not, these keyboards work. Will the keyboard strategy matter? In the short term, I think so. In the long term, I’m not so sure.

Now, don’t think for a second that I’m predicting all of these things are going to be wonderful and work like a charm. I think they have the potential to be quite exciting. I also think there is potential for this gamble to be a big fail. There is just too much we don’t know. The real question is can Microsoft capture the public’s imagination (think consumer) with these devices. That’s going to be tough given that Microsoft doesn’t look to have the usual retail channels in its immediate plans. Ineffective marketing is a shadow that Microsoft created for itself and still seems to be operating under. I have to say after that new commercial rolled out last night, Microsoft might be off to a bad start. Aside from the flash and dance, we learned nothing really knew about the Surface Tablets beyond the fact that there’s a keyboard that goes click. But then, Microsoft has always had a marketing problem. That said, sooner or later we’ll have to see these devices in action with use cases that tell us why we need one. Is that really that important? Absolutely.


So, why do I need a Surface RT Tablet? I don’t. But, this is a turning point one way or another for Microsoft. It may also be a turning point for the rest of the industry as well. If Microsoft has a success here, things change. If Microsoft’s gamble fails then things change. Or course you could argue that the rest of the industry has already rounded the corner and Microsoft is still at the starting gate. I think that’s accurate.

As someone who watched Redmond flail and fail with its earlier Tablet strategy, I’d like to hope that perhaps Microsoft could actually figure out how to get in the game this time around. I’m looking forward to trying out Surface RT. I’m keeping my mind open to the experience once the device and keyboards arrive on 10/26. While I’m willing to gamble with Microsoft’s big gamble, I don’t know how many will feel the same way. And that might be Microsoft’s big miscalculation here. My guess is that what we start hearing on 10/26 will give us some early indications as to how this pays off. Or not. I’m sure we’re going to hear some good and quite a bit of bad in some of the reporting. By 10/27 there will be some reviews that claim Surface RT is a failed experiment. It may well be. But, I’ll experience this for myself and let you know what I think.