The launch of Microsoft’s Surface Windows 8 Pro tablet over the weekend was marred by device shortages and long lines of customers, as if Microsoft hadn’t anticipated for the large demand of its much anticipated tablet after huge marketing dollars were spent leading up to the February 9 event. Though on the surface, the success of Surface Pro may have been hampered by analysts, pundits, and tech commentators who say that Microsoft didn’t have enough supply of the tablets to create artificial sellouts of the device at Microsoft’s online stores, Microsoft retail stores, Best Buy, and Staples. Naysayers are arguing that the same hype and sellouts had surrounded the Surface RT, though that product later suffered high return rates. However, in spite of the drama surrounding the launch, the Surface Pro is a success for Microsoft and, more importantly, for its OEM partners.

But isn’t the Surface supposed to compete against hardware released by partners like HP, Dell, Lenovo, Acer, Asus, Samsung, and others? Yes, and no. The Surface is the Microsoft equivalent to Google’s Nexus line, a device where Microsoft hopes would raise the bar for future Windows products and set the expectations. It’s also a device that’s intended to raise awareness. And at that level, Microsoft’s mission seems to be on track. 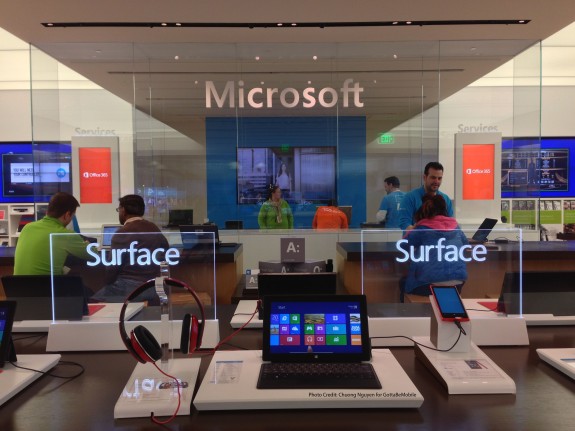 Visiting two local Microsoft retail stores in the San Francisco Bay Area–Stanford Shopping Center and Westfield Valley Fair Mall–there was an unusually high amount of visitors and chatter at these stores despite Microsoft not having a single Surface Pro unit for sale. Customers were eager to test out the alternatives and the tables housing the competing Asus, Acer, Lenovo, HP, and Samsung tablets were just as busy at the stores as the display tables for the Surface Windows RT and Surface Windows 8 Pro tablets. Customers were talking with Microsoft customer service representatives about hardware features, technical specs, and useful features, asking these reps how these devices stacked up to the Surface Pro competitively.

I’ve visited the Microsoft store numerous times and never had I seen so much interest in touchscreen tablets, Windows 8, or any of the hardware on display at the stores. Now, with Surface Pro, the store was buzzing with interest and the Surface Pro is a halo product that’s spreading some of the excitement to other products, like the Taichi and the Lenovo Thinkpad Twist.

Sure, Microsoft may have botched the launch of one of the most anticipated Windows-based products that saw lines that resemble an iPhone launch at Apple, but what the commentary on the Surface Pro’s launch was missing is that it opened dialogue and the Surface Pro didn’t just mark an era where Microsoft is entering the hardware business, but solidified the need for Microsoft retail stores.

And the Microsoft retail store is another unsung hero of the Surface Pro’s ‘botched’ launch, as Internet reports would have you believe. It was Surface Pro that brought the crowds out in masses, but it was the Microsoft retail stores that housed these crowds. Microsoft’s stores, when they first launched, have had massive spaces compared to the Apple stores which were often a few doors down or across the mall. And though warm in appearance with bright colors and dark wood compared to the cold aluminum and glass-clad Apple counterpart, Microsoft had failed to attract the same number of visitors. That changed with Surface Pro, and Microsoft’s retail stores were given new life and purpose.

I overheard a customer trying his best to get a Microsoft retail sales rep to make a recommendation stating that the Surface Pro was better than another OEM rival, and the rep cleverly and expertly handled the question like a PR pro, stating that his job is to support Windows, Office, and all the hardware running these great software packages. The rep states that specs for the devices that the customer was looking at–the Samsung ATIV Smart PC Pro 700T and the Surface Pro–were competitive and it all boils down to preference. There doesn’t seem to be any sort of competition from Microsoft, and the retail stores seem to have purpose–to support Windows 8.

From setting up PCs to setting up one-on-one training sessions with Microsoft experts, these retail stores now help Microsoft establish community and hold open dialogue with customers. Surface Pro brought the customers to Microsoft and retail stores brought Microsoft to these customers. For a first generation product that’s unproven, I think Microsoft had hit a home run with its strategy. I do wish they had shipped more units of the Surface Pro to retail stores as both stores ran out of inventory by the time I got there in the afternoon on launch day.

Still, at the time of this writing, the Surface Pro remains to be out of stock in both 64 and 128 GB varieties at Microsoft retail stores and at Best Buy and Staples.