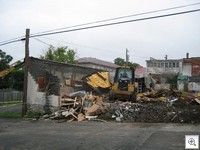 Yesterday was a big day at Wayside Theatre where I work. We’ve been working for a number of years to renovation and expand our exsisting theatre complex. Some of that has been chronicled here, and a lot of it on my personal blog. Although a lot of work has already happened, things really began in earnest yesterday when demolition began on the two buildings immediately behind the theatre. Knocking down buildings is quite a sight. Within in day they were reduced to rubble.

So what does this have to do with Motion and the C5? I was with the job foreman a good portion of the day, and of course I (and others) were taking lots of pictures. So was he. This morning at our now regular morning meetings he was admiring my Tablet PC, and wondering if that would make his job easier. I bet you know how I answered that.

He just wished that the X61 ThinkPad had a camera included.

So, I showed him Rob’s InkShow of Motion’s C5 with its camera, ability to be cleaned off quickly, ruggedness, and portability and he was ready to buy. He loved the camera option because he hates the way he has to do photos now. Except for that white color. Even with the ability to clean it off quicky, he’s afraid of that white case. Of course there are other rugged options out there. But in this case he was really impressed with the size and handle on the C5.

I’ve said it before and I’ll say it again. Motion has a winner in the C5 and I believe it will go far beyond the medical field. They need to really be thinking about other vertical markets for the C5.