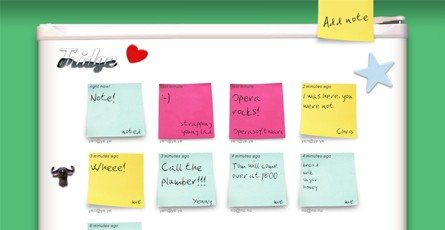 Leave a note on the fridge

Reading through Dan Frommer’s analysis at Silicon Alley Insider, “Opera Unite Isn’t Going To ‘Reinvent’ Anything,” one gets the impression that Opera Unite doesn’t have the mainstream appeal needed to live up to its promise of “reinventing” the web. Granted, it is a grandiose claim of which anyone should be dubious. However, Dan overlooks several major points that force me to question his analysis as well.

First, he points out, “It is not solving a problem that people have with their Web browsers.” To an extent, I agree, but it would be more accurate to say, it doesn’t solve a problem most people have yet. As people share more of their data on the web, various services have popped up to accommodate them. But this involves dealing with multiple services, often from different sources. It’s ridiculous to think there’s no market for a unified solution, particularly since Google is doing the same. That’s why Opera is calling their service “Unite,” and I think there is substantial room for growth in that area.

Furthermore, Opera Unite offers live, local control over one’s files, while most other services do not. You add and reorganize directly on your PC, exactly as you want. If you want to delist a file, you can delete it or move it locally. No upload, no sync, no messing with an outside server, it all happens directly on your computer (or in my case, on my network attached drive).

Second, he twice mentions Opera’s 1% market share to emphasize Unite will only be embraced by the “geeks” already using Opera. Fair enough. I’m a geek (though not previously a regular Opera user), and I’m excited about Unite. One thing though: Opera Mobile has a huge market share, surpassing iPhone Safari at last report. Surely that’s worth considering in an analysis of a browser service that allows you to share data through a web browser, potentially allowing you to sync your handheld to your desktop through Opera. Seems worth a mention at least.

Finally, the service just rolled out and is still in the experimental stages. The initial functionality is only the basics that people expect. More will come and developers have not had their shot yet. Making a call on it now would be like judging the pre-release version of Firefox before it had a sizeable extension library and dismissing it as a fringe app.

And that’s why I’m neither buying nor refuting the claim that Opera Unite will “reinvent” the web. I see a lot of potential here, so maybe it could. On the other hand, my enthusiasm is that of a geek, so I can’t judge whether there will be mass appeal.

As for my own promised trial, dealing with a wayward cat prevented me from having it completely set up for testing today (didn’t get to activate the services), but I managed to get it installed and successfully accessed it via my iPhone over 3G this morning. Hope to give it a thorough testing soon. But again, I’m one of those “geeks” who will do such things.