Why You Should Reserve Windows 10

The past Monday millions of users all began receiving notifications asking them about Windows 10, Microsoft’s latest operating system. Besides a brief look at the operating systems and big new features, the notification doesn’t go into a lot of detail. This week millions are asking themselves if Windows 10 is worth upgrading to if they’re running Windows 7 and Windows 8. It’s too early to answer that question fully – Microsoft is still finishing and polishing the operating system. The second most popular question seems to be why Microsoft is asking users to reserve Windows 10 upgrades in the first place.

Why Reserving and Upgrading to Windows 10 Is A Good Idea

Simply put, you’ll want Windows 10 because it cleans up some serious messes Microsoft made with the last two major updates and brings a whole new generation of experiences to users still left on Windows 7.

Lets talk about those Windows 8 and Windows 8.1 features. There are people who like Windows 8. They like the way apps can be pinned to the Start Screen for quick notifications. They like the way they are able to download apps from Microsoft ‘s Windows Store and know that they aren’t getting some piece of software that might harm their computer. Windows 8 has a lot of great features, but in hind-sight they’re buried under some questionable design choices.

Frequently, you can find yourself lost in Windows 8 looking for search or trying to figure out where the power-button is. Something as simple as closing apps isn’t necessarily obvious to casual users. The are two places to change settings and two versions of Internet Explorer, both distinctively different from the other. If you’re a notebook or desktop user, Microsoft forced the fullscreen Start Screen and apps on you. 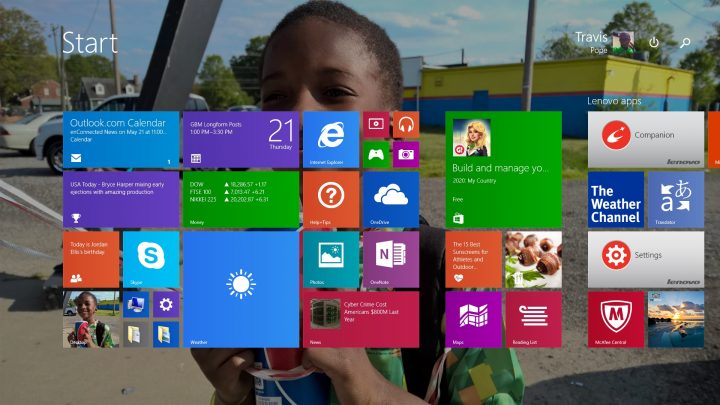 Windows 10 lets you keep the advancements in Windows 8 like the Start Screen, Windows Store and easy restore options without having to fiddle with third-party apps to bring the Start Menu back. Windows 10 adapts to the inputs users have. Mouse and keyboard users will get a Start Menu that’s completely adjustable. Users can even pin Live Tiles and turn the full screen option back on if that’s what they’re comfortable with. The operating system also makes it possible to run Windows Store apps in the Desktop, making it infinitely easier to multitask and more mouse and keyboard friendly. The Windows Store itself is improved. You can download Desktop apps, like iTunes, directly from the Windows Store too.

The Start Menu in Windows 10 with Touch Mode off.

Windows 7 users are in for a huge leap in terms of functionality. Windows 7 doesn’t do much with Microsoft Accounts without separate downloads from Microsoft’s website. Some users rely on sites like Download.com to get their favorite apps.

Read: 3 Early Reasons to Not Upgrade to Windows 10

Quality, built-in apps now take the place of the many extra programs you needed to download before. Putting in your Microsoft Account unlocks a dedicated Calendar and Email client, called Outlook Mail and Outlook Calendar. Windows Media Player has been mostly replaced with dedicated Music and Video apps. These apps allow you to enjoy the content you own or effortlessly purchase more from Microsoft’s library and sync it to your other computers, smartphones and tablets. The time it takes for your PC to be usable after it has Windows 10 will completely blow you away if you’re coming from Windows 7.

Read: Windows 10 vs Windows 7: What You Need to Know

Finally, with Windows 10 upgrade users get to take advantage of Microsoft finally shouldering the responsibilities of updating and restoring their PC. Before Windows 8, Microsoft let hardware makers manage how their PCs were restored. You’d have to clear off all your data yourself and hope that you remembered to make a recovery disc. Both Windows 8 and Windows 10 allow users to go back to a factory-fresh install of their operating system – without having to back up all their files.

Windows 10 is Windows 7 for a modern era, I’d say. It’ll provide a decent foundation and get out of your way, theoretically.

Microsoft is hoping that everyone with a PC running Windows 7 or Windows 8 will upgrade to Windows 10, that’s why it’s rolling out that new notification this week. The operating system update is free, but the company hopes you reserve Windows 10 now so that it can prepare you for the upgrade ahead of release.

Once you’ve reserved your digital download, Windows Update will download the upgrade for you the moment it’s available. It’ll be up to you to install it, but you’ll already have all the files you need on your PC. Reserve Windows 10 now and avoid the mad rush of people all trying to download the operating system at the same time on release day.

Good luck with your Windows 10 upgrade. The operating system begins rolling out to Windows 7 and Windows 8 users on July 29th.