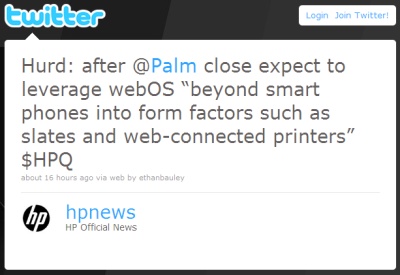 In their 2Q earnings call last night, HP CEO Mark Hurd announced their intention to take webOS “beyond smart phones into form factors such as slates and web-connected printers“, reaching the outside world via Twitter. Great that they’ve affirmed their commitment to a slate, but the printer comment has raised eyebrows. I’m not sure why.

First, printer interfaces haven’t changed much over the years and they are all pretty much garbage. Sorry, but we haven’t evolved much from the days of “PC load letter“. If HP wants to equip printers with capacitive touchscreens and the webOS “card” interface, more power to ’em.

Second, as we go more mobile and wireless, we need simpler yet smarter ways to print. Hooking up to a local network and installing print drivers is fine when you’re in your own home or office, but it’s cumbersome if you have to print something in someone else’s office. The ability to send documents to a printer over the web would simplify that. No drivers needed. Just email or ftp the document over, then view and confirm on the printer before printing. The webOS Synergy system could be leveraged to maintain a list of approved printer users for security.

While we’re at it, why not get rid of PC-side printer drivers altogether? Just send your document to the printer and let it handle the print conversion, shooting back a page preview for final approval as needed. Obviously there will still be a need for some type of driver to convert the data, but that can be handled with printer-side software, possibly left up to developers to build. Or HP could push out updates to their printers over the web. Lot of potential here for making printing systems easier for HP, developers, and users.

Finally, printers do more than print. Many of them, to my dismay, receive faxes as well. I would love – LOVE – if, as a new standard, printers would store incoming faxes digitally then let a user decide whether to print, forward or delete. I know you can do that now with a fax modem on a PC and other networked solutions, but the old fax system is so entrenched that standalone fax machines are still a standard. If we can’t do away with fax machines entirely (and HP certainly wouldn’t want to), the least we can hope for is to make them smarter.

And that’s just in printers. If HP wants to go all in with webOS, they can add always-on functionality to PCs that can boot up Windows in the background; slap smart displays on typically headless servers; upgrade their calculators with full-face touchscreens for better views of graphs; and build it into their scanners to send scans anywhere. The sky’s the limit, and I look forward to seeing how they take advantage of this powerful yet light OS at their disposal.