Why the iPad 2 Will Have Verizon 3G 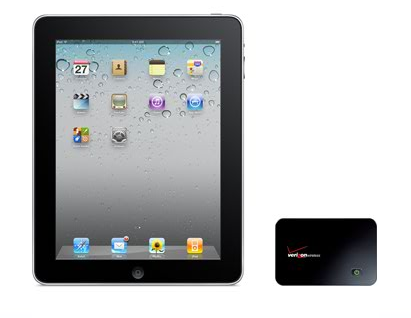 Apple will be announcing the iPad 2 in about 12 hours and it will probably have Verizon 3G baked in.  Recent moves by Verizon and Apple point to the likelihood of a Verizon compatible iPad 2 .

(Update: Apple’s made it official – The iPad 2 will have Verizon 3G built in.)

The first generation Apple iPad is sold by both AT&T and Verizon, but they are two entirely different devices.The iPads sold by AT&T are of the WiFi + 3G variety, while Verizon sells the more affordable WiFi-only iPad models. Verizon sells the iPad alongside the Novatel MiFi wireless hotspot. The combo allows Verizon subscribers to use their 3G service with devices other than the iPad, but it’s not as elegant of a solution. The other big downside of the MiFi is that it requires a two-year Verizon contract, which means users must pay a lot of money, even if they don’t need 3G on a regular basis. The iPad with built-in 3G allows users to subscribe on a month-to-month basis with AT&T.

Things have changed quite a bit since Apple introduced the iPad at the beginning of last year. Verizon began selling the iPad back in October and the iPhone 4 last month. Verizon typically demands quite a bit of control over devices it retails, placing Verizon-branded applications and requiring exclusive models. But the iPhone 4 is void of this treatment and presented almost exactly as it is by rival AT&T. It’s very likely that Apple and Verizon negotiated a deal for the iPad at the same time as they worked out the iPhone deal.

Another thing that’s changed is that Apple finally has credible competition in the Motorola Xoom and other powerful tablets being released. Apple needs to offer an iPad with wireless Internet access built in to help level the playing field. I’ve enjoyed using a Novatel MiFi since it was introduced, but it is yet another device to manage and keep charged. With a 10+ hour battery life, the iPad outlasts the MiFi, which can make it frustrating for long days away from a reliable power source.

If Verizon does play Apple’s game of allowing customers to sign up for 3G service directly from the iPad, this will be a big departure for Big Red. Currently, Verizon requires recurring billing with 3G service plans and credit checks, even when customers go the contract-free route and pay more for their devices.

One thing we probably won’t see tomorrow is an iPad 2 with 4G LTE. As we pointed out earlier, there may be some issues with running iOS devices on the LTE network.

If we do see a Verizon 3G capable iPad it will most likely be the same model that will be sold by AT&T. Apple keeps its product line intentionally slim and would continue to do so with the iPad 2 by placing both GSM and CDMA technology in every 3G capable iPad.

Here’s my list of iPad 2 predications. If you’re still on the fence as to whether or not to buy an iPad 2 after tomorrow’s announcement, you might want to hang tight until the iPad 3 is released, which may happen this fall.