Users of devices running Windows 8, Microsoft’s latest and greatest operating system for tablets, desktops and laptops, are going to find themselves waking up to a Windows Store that looks completely different over the next few weeks.

Yesterday Microsoft announced that it was releasing what could charitably be described as a massive update to the Windows Store experience. In a post on the Windows Experience Blog, Microsoft insists that these changes are being made based on the feedback provided to it by customers.

And to be clear, that feedback must have included a lot of complaints about how hard it was for users to find apps and access basic functionality inside the application. Like the Xbox Music app before it, the new Windows Store includes a persistent navigation that locks core functionality to edge of user’s screen. Inside that bar are quick links for finding out what apps are currently topping the Windows Store charts, a new page the aggregates Collections, a search bar and a way to quickly access account information. 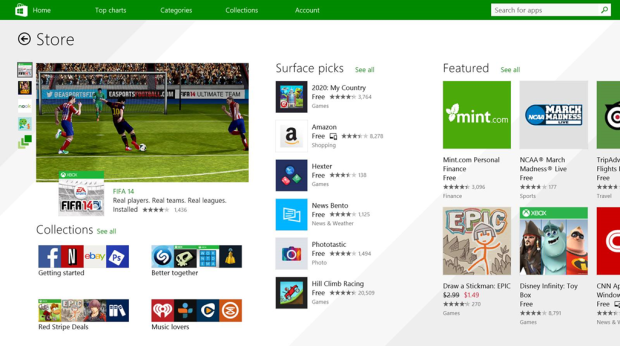 This persistent navigation bar is a big deal, not only because it wasn’t there in past versions, but because it is one of the few changes that most users can agree makes Windows Store apps better. Before today, the Windows Store hid all of these options in a sort of drawer that users had to either right-click to find with a mouse or swipe from the top of their screen to access. Unfortunately, there was no on-screen cue to let users know that the options were hidden and many users have probably never actually found the options on their own. That’s especially true of mouse and keyboard users.

Speaking of mouse and keyboard users, it’s likely that they’ll find this updated version of the Windows Store easier to browse. Microsoft has played with the information density in the Windows Store again. In short, there’s a lot less horizontal scrolling when first opening the app. It’s a nice compromise that those using Windows with a touch screen should still find comfortable to use.

This updated Windows Store also features Collections more prominently. Like on Windows Phone, Windows Store Collections are simply different groupings of apps based on specific themes. For example, one of Microsoft’s current Collections contains all of the major social media applications that are available on Windows. Essentially, Microsoft is using Collections is a way to highlight apps of notoriety in the Windows Store. Microsoft shrunk the slide show that used to feature prominently in the Windows Store too. Picks, those apps chosen by the each device manufacturer for their particular users, are still being featured just to the right of this smaller slide show. They’re still up-front so users can spot them as quickly as possible.

Finally, Microsoft has added a new indicator that tells users when an app they can download for free or purchase might be available on Windows and Windows Phone. That’s key as Microsoft seems to be melding the Windows and Windows Phone platform’s to create a cohesive experience no matter what device users are on. Today, buying an app in the Windows Store automatically unlocks the version for Windows Phone. The process works both ways, and is truly the biggest benefit of staying in Microsoft’s ecosystem for a phone or tablet. Today, only the iTunes Store comes close to providing users with this experience and users have to pay again if they want a Mac version of their favorite iPhone or iPad app.

Unfortunately, Microsoft hasn’t changed one of the core issues some users have with the Windows Store. Whereas laptop and desktop users have been conditioned to scroll up or down for more information, Windows 8, and thus the Windows Store, still use a lot of horizontal scrolling. It isn’t that scrolling from left to right for more information is problematic. It just feels slightly unnatural if a user has grown accustomed to the way scrolling is done on the web. That being said, that’s likely a personal preference depending on each user.

Microsoft only began deploying the new Windows Store to devices running Windows 8.1 yesterday. As it’s using the Windows Update system, the update will arrive on user’s devices over the next few days automatically if the device is has been configured for automatic updates. Users can get the new Windows Store update manually by checking for and installing updates manually in the Update menu inside the Control Panel or Settings app.

Users who are still running Windows 8 will need to head to the Windows Store to download the Windows 8.1 update first. If there’s no banner prompting them to install the free update than it’s already loaded on loaded on the device.